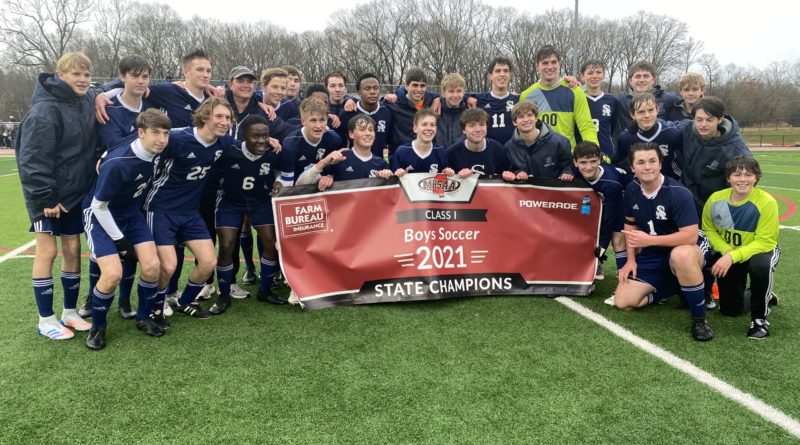 CLINTON — Sometimes one goal is all it takes. Well, one goal and 100 minutes of solid defense.

That’s exactly what it took Saturday in the 2021 MHSAA Class 1 boys soccer state championship, and the boys from St. Andrew’s Episcopal School delivered.

The Saints knocked off Clarkdale 1-0 in a rain-soaked game that required overtime after the two teams played to a tie after 80 minutes.

“They played a great game and I couldn’t be prouder of our guys, especially the seniors,” St. Andrew’s coach Scott Crawford said. “They’ve been through a lot these past two weeks, just a lot of turmoil they had to overcome. We had a tough, tough semifinal game against Amory that went to overtime … so two overtimes wins in a row to finish the season.”

The game-winning goal came just three minutes into the first of two 10-minute overtime periods off the foot of freshman Jonathan Livingston.

It was a fortunate goal in the sense that Livingston got possession off a deflection and ended up right in front of the goal with the ball, but the freshman didn’t waste the opportunity, either.

The final 17 minutes, and particularly the last four, was defined by a desperate, furious Clarkdale rally. The Bulldogs took four shots on the St. Andrew’s goal in the those closing minutes, including one with less than 10 seconds left on the clock that was only saved by a diving stop from St. Andrew’s senior keeper Jack Sewell.

“We just had to get that goal and we knew we were going to have it because we were controlling the game,” Sewell said. “Once we got it, we just had to pull through, waste time and get it done.”

The Saints did just that, and claimed the school’s first boys’ soccer championship since 2007 in the process.

As elated as the Saints were, the Bulldogs were equally disappointed.

Clarkdale came into Saturday’s championship match — the first in the school’s history — after breezing by Resurrection 7-2 in the South State Final.

They had enough shots on goal Saturday to match that scoring outburst again, but couldn’t get one to find the back of the net.

“I couldn’t be more proud of the way we played,” Clarkdale coach Luke Smith said. “St. Andrew’s gets that goal, kind of lucky, but you have to tip your hat to them because they pressed us for a lot of the game. And we defended well for about (99 percent of the game). It was just that one minute down there that we kind of fell asleep. But overall, I thought we played hard.”