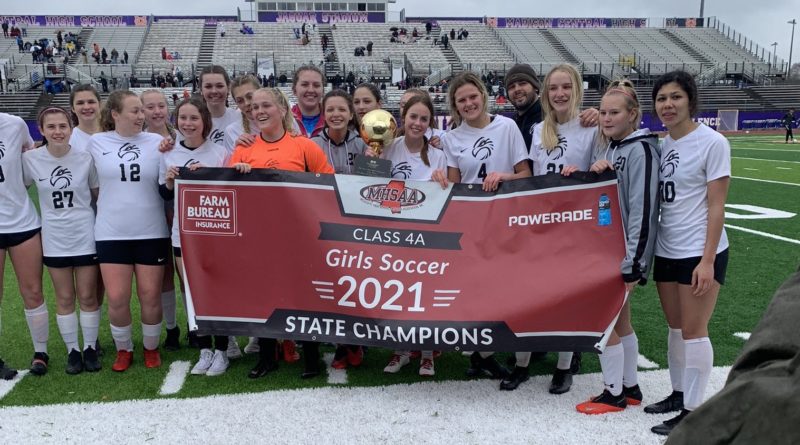 MADISON — It was déjà vu all over again.

Madison Carroll scored off a deflection in the first minute of golden goal overtime to lift Florence over West Lauderdale 3-2 to claim the MHSAA Class 4A girls soccer state championship Saturday afternoon at Madison Central.

It was the Lady Eagles (18-2-1) fifth state title in school history and first state title since 2018.

Saturday’s game was the fourth-straight meeting between the two teams in the championship round. Florence beat West Lauderdale 3-2 in golden goal overtime in 2018. The Lady Knights had beaten Florence the last two seasons for the 4A state title.

“I just saw the ball bounce in front of the net, and we had someone there on the back post to put the ball in the goal,” said Florence coach Bill Hood. “Just like 2018 all over again. Golden goal and we end up on top 3-2. The last two years they’ve gotten the best of us and we just found a way today.”

Florence struck first on a penalty kick by Shaelynn Quick with 24 minutes left in the second half.

West Lauderdale got the equalizer from Addiyson Pope, who scored off a throw-in with 13 minutes left in the second half.

The Lady Knights scored in the first two minutes of the first 10-minute overtime on a goal by Southern Miss signee Alice Williamson.

Florence tied the game up at 2-2 on a goal by Carroll.

After the game remained tied after the second 10-minute overtime Carroll was in the right place at the right time. Florence took the opening kickoff of the first golden goal overtime and the ball eventually found Carroll standing just outside the back post. Her shot went into the far corner of the net to win it for the Lady Eagles.

“Madison Carroll scored the tying goal in the 2018 title game and scores two in this one as a senior, and I couldn’t be more proud,” Hood said.

“I made a cross to Christina (Guzman) and I saw her shoot and the defender miss the ball, so I took the shot and it went in,” Carroll said. “It was a great game. Both teams went back and forth and fortunately we came out on top.”

“Two quality teams,” said West Lauderdale coach Alex George. “Both teams had chances and they took advantage when it mattered most. It’s a learning experience for everyone, and it’s unfortunate someone had to lose.”