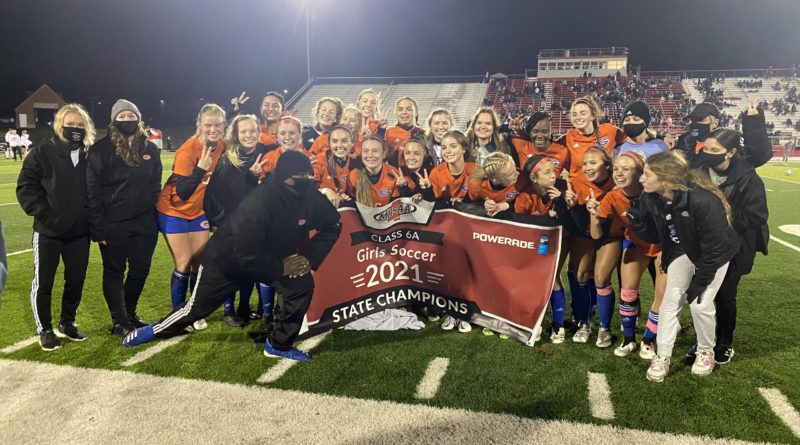 CLINTON — Madison Central’s girls had pulled through some rough stretches on their road to the MHSAA 6A State Championship game, but nothing could prepare them for the one-two punch defending champion Gulfport threw at them Saturday.

The Admirals got second-half goals from both parts of their splendid forward duo of sophomore Abigail Badurak and junior Kate Smith to erase a 1-0 halftime deficit and defend their 6A title.

“We knew coming in that it was going to be a tough match,” Gulfport coach Chris Pryor said. “Cecil Hinds is an incredible coach who has coached so many state championship teams, but I felt like we could play with them and that it would come down to who makes the most mistakes. They capitalized on one of ours early, but I told the girls to dig deep — it’s not over, and for us to dig our way out of that kind of hole is phenomenal.”

When you’ve got a couple of high-caliber forwards like Smith and Badurak, a comeback can happen in a blink.

Badurak nearly evened the score in the first half, right after Olivia Tribolet scored to put the Jaguars on the board just six minutes into the game.

Badurak broke free just moments after the Admirals put the ball back into play and scored what appeared to be the game-tying goal, but the official on the spot came in late with an offsides call that brought out the boo birds from the visitor’s stands.

She finally got the equalizer three minutes into the second half, when she broke free and fired a bullet into the top left corner of the net. Smith added her goal a few minutes later to give the Admirals the 2-1 lead.

“It was amazing (to get that goal) and amazing that Kate (Smith) scored a goal because we always work so well together,” Badurak said. “We’re dangerous when we come together.”

The championship was Gulfport’s third title in school history.

For Madison Central, the championship drought reached its fifth year. The Lady Jags won eight championships from 2000 to 2016.

“I think the fans got their money’s worth tonight,” Madison coach Cecil Hinds said. “I hate to be on the losing end of the stick, but I couldn’t be happier for coach Chris Pryor. He’s pure class, and his team was quality today. They put the pressure on us and weathered the storm. I really felt like either team could win … but congratulations to coach Pryor.”