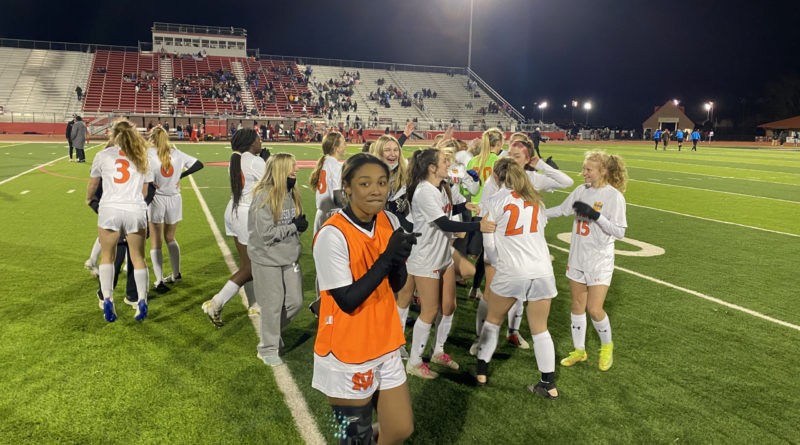 The girls defeated Clinton 2-0 in the early game, and the boys beat Clinton 1-0 on a frigid night at Arrow Field.

“This is what we train for,” Jaguars coach Cecil Hinds said. “I know the kids are very excited, but there’s a lot of work that goes into it. There’s a lot of teams deserving of these spots, so we are very fortunate to get the results we did today and I hope it continues into this weekend.”

The Madison Central girls will face Gulfport, which knocked off Oak Grove 2-1 Tuesday afternoon, in the 6A State Championship at 6 p.m. Saturday at Brandon High School.

The Madison Central boys will face Brandon, which defeated Ocean Springs on penalty kicks Tuesday, at the conclusion of the girls’ game.

If those games go anything like Tuesday’s, it’s gonna be a wild Saturday night.

The Clinton girls (12-3-7) had cruised into the North State Championship after defeating Lewisburg and Oxford, 2-0 and 4-0, respectively.

It was clear early on that Tuesday’s game wouldn’t go so smoothly. The Lady Arrows had opportunities to score in the first half with four shots on the goal, but never could get past the Madison defense and keeper Kellen Fairburn, who had a couple of big saves.

Even though the match went into the half tied 0-0, it felt like the Arrows had the upper hand.

But Madison Central (11-2-1) came out rejuvenated in the second half and made the most of their possessions. They spent most of the first 10 minutes of the second half on the Clinton end of the field, and the big mistake came for the Arrows on a penalty with 29:30 left.

That’s when Clinton’s Raily Laird drew a yellow card for a pushing foul near the far boundary around 28 yards from the goal. That set up Olivia Tribolet’s beautiful kick that sent the ball arching through the air and over the out-stretched hands of the diving Clinton keeper for the first goal of the game.

Clinton couldn’t take advantage of the few second-half scoring opportunities it got, and when MC got another goal with a little more than two minutes left in the game off the foot of freshman Akala Jacobs, that sealed the deal.

The boys game was much closer.

The Arrows (12-6-3) had scored four goals in both their previous playoff wins over Lewisburg and Germantown, but found the sledding much tougher against Madison Central.

Most of their scoring opportunities came in the first half, but they were turned away by the Madison Central defense time and again.

The two teams played to a 0-0 tie in the first half, but the Jags broke through with 18:30 to go in the second half with a goal off the foot of Dillan Smith.

The last 15 minutes of the game were fierce, with Clinton trying furiously to tie the game. But the Madison defense held strong, much to the relief of Hinds, whose heart was racing at 140 beats per minutes according to his watch.

Madison Central had lost in both of its previous meetings with Clinton (1-0 and 2-0), but as Hinds said, the playoffs are different.

“It’s the North State Final, that’s all I can say,” he said when asked what made this game different. “(Clinton coach) Tyler Wade is a good friend of mine and he’s done a tremendous job with that program and that team. This was certainly a well-played, well contested match and I hate it for them, to be on the losing end of it, but I’m certainly proud of these guys and excited to be moving forward.”