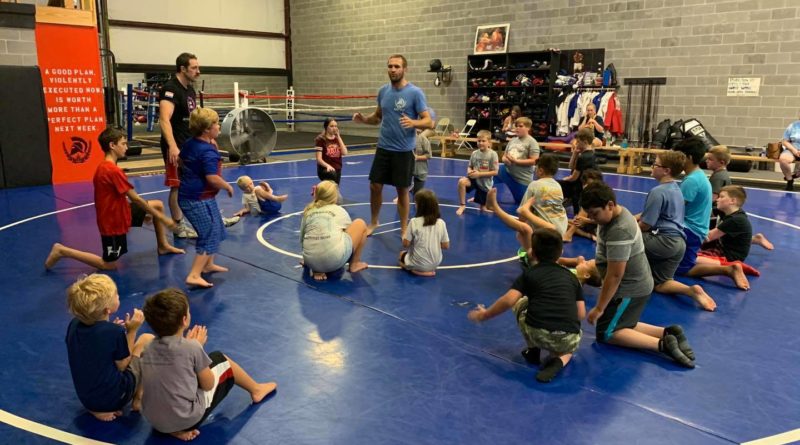 North Pontotoc freshman Landon “The Bulldozer” Ward’s family was living in rural Missouri when he discovered olympic-style wrestling at the age of 11.

At the urging of his father, Ward wandered into the back room of a gym where he was training in MMA-style fighting and jiu-jitsu to find a couple of junior-varsity wrestlers working out. Immediately, he got interested in the sport.

“I liked it right away,” Ward explained. “I got to participate in a couple of tournaments up there before we moved back to Mississippi and I told my dad that if there was a way to keep wrestling when we got back to Mississippi, I wanted to stay in it.”

The coach advised Landon’s father, Patrick, he should do whatever he could to keep him involved in the sport, because he showed serious potential.

When Ward’s mother’s work as a traveling nurse brought the family back to North Mississippi last year, there weren’t many options. The closest wrestling club was in Collierville, Tennessee, so Patrick Ward committed to making the three-hour round trip two nights a week for a two-hour practice session.

On the weekends, the duo would strike out on trips to tournaments in different parts of Tennessee and Alabama so Landon could compete.

“We were having fun, just the two of us on the weekends striking out for Birmingham or Knoxville or Huntsville,” Patrick Ward said. “Three hours of driving for 90 minutes to two hours of practice was tough, but we were doing it.”

And it stayed that way until they met Brian Fox, an Ohio transplant determined to advance the sport in Mississippi’s high schools.

Fox, a 26-year-old former college wrestler, is the founder of the Tupelo Wrestling Club, the only USA Wrestling-member club in the state. His gym has become an outlet for several athletes like Landon and 15-year-old Tupelo Christian student Jamie Tallent.

Tallent competes in golf, football and power-lifting at TCPS, but he was hooked on wrestling after just a couple of sessions.

“My dad works in the building next to the gym, and I guess they hit it off and my dad talked me into going for a day or so,” he said. “I had a lot of fun and I’m still going two months later.”

The MHSAA currently sponsors wrestling, but because at least 50 percent of the schools in the state don’t have teams, there is no state championship or in-state competitions.

Like Ward, Tallent said he would definitely participate in wrestling if his school offered a program. Both said they had friends who would participate as well.

He also said he can tell some of the skills he’s learning in the gym will translate into progress on the football field.

“I’ve noticed it’s making my hands quicker,” he said. “I play defensive line, so using my hands to get past people is the name of the game, and I can tell it’s helping with that for sure.”

And that’s the point Fox has been trying to make to athletic directors with programs ripe for starting up wrestling programs — much like power lifting, the sport can develop skills that will help student-athletes across other sports and in life in general. Ward said he’s learned skills that have translated into his jiu-jitsu competitions as well.

For Fox, the knock on wrestling — that it would interfere with other sports or activities — is just crazy. For the past couple of weeks, he’s been making the case for wrestling on the Mississippi sports radio talk show circuit.

“The cross-training benefits are huge,” Fox said. “It’s common knowledge that it helps with other sports, especially football, which is king around here.”

The other selling points are fairly simple. Unlike baseball or softball, wrestling can be an individual sport. That means you don’t have to have 10 students to make up a team. It can be as small as one or two participants. Also, there isn’t a whole lot of equipment necessary, you just need a mat, some shoes and headgear.

To mitigate that cost, Fox has offered local schools the opportunity to borrow mats. Since not many coaches around here are well-versed in wrestling, he’s also offering to serve as a volunteer coach until the school’s hire their own or find someone in-house to handle coaching duties.

“We’re just trying to do whatever we can to make it as accessible as possible,” he said. “We’re starting here in Tupelo, but I’d love to see it go state-wide.”