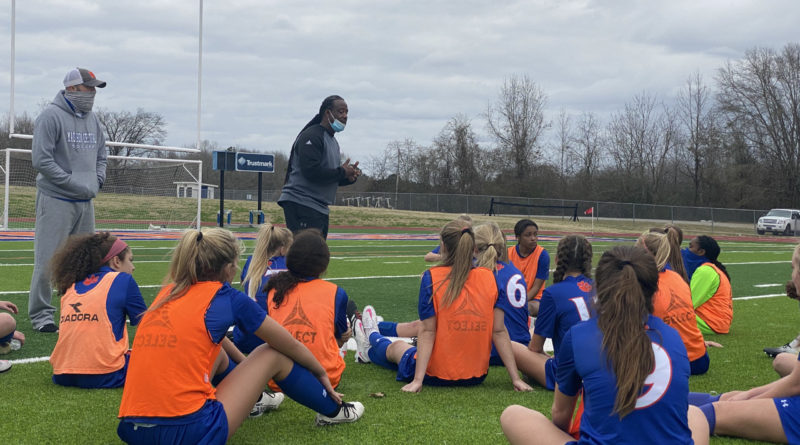 We hear sports commentators describe contests as “a game of inches” all the time, but Saturday’s second round 6A playoff soccer match between Madison Central and Germantown really was.

The Lady Jaguars squeaked out a win on their home field, beating the Lady Mavs on penalty kicks, 4-3, in the most dramatic fashion imaginable.

The two teams had played 80 minutes of scoreless regulation, 20 more minutes of scoreless overtime and 10 minutes of sudden death when it came time for the shootout. The Lady Mavs (10-4-2) took a quick 2-0 lead on the first two turns, with goals from Keely Marshall and Darby Melia and a pair of saves from sophomore keeper Avery Addison.

But Madison keeper Kellen Fairburn came up with big saves on the third and fifth turns, and her teammates Lorilee Taylor, Cate Bourn and Nan Cullum all made their shots to tie the shootout at 3-3.

Fairburn made a diving save to her right against Kayla Young, which set up Madison Central sophomore Mary Jackson Brown for the game-winner. Her kick hit the crossbar and appeared to shoot straight down and bounce forward, out of the net, but the official on the spot said the ball hit behind the line and called the goal good, giving Madison Central the win.

Upon video replay, the official made the right call, but man, oh man, was it close.

“To be honest, I wish there was a different way we could decide the game,” Madison Central coach Cecil Hinds said. “I thought the two teams fought so hard, so fiercely on the field, that it’s a tough way to end it. It’s tough to tell your team ‘Oh, you didn’t make it this time because of penalty kicks.’ But when you get into a situation like that, all you can do is hold your breath and hope for the best.”

The win moved the Lady Jags to 10-2-1 and into the 6A North State Finals, where they will face either Clinton or Oxford.