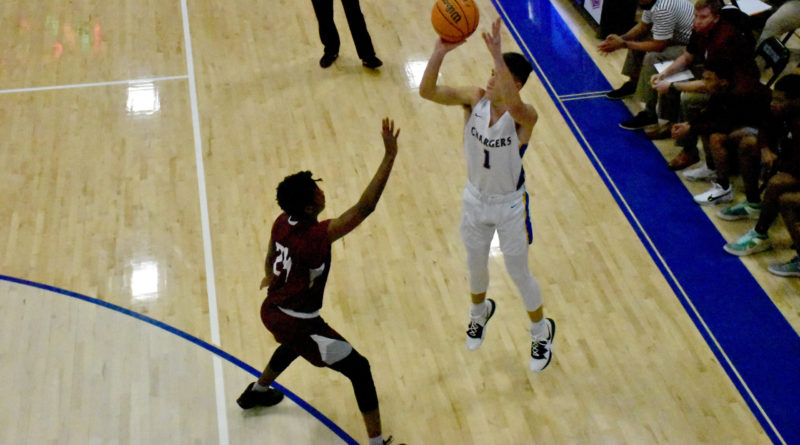 OXFORD — For a team that has struggled with consistency throughout the 2020-2021 season, the Chargers found their man the past two games.

Behind a 29-point performance from guard Derrius Southern, the Oxford Chargers (10-8, 2-2 Region 2-6A) got back on track Tuesday night as they knocked off the Horn Lake Eagles 75-68 at Oxford High School. Southern also finished with five assists, four rebounds and three steals.

“Derrius (Southern) has put it into a different gear the past two games,” Oxford coach Drew Tyler said. “He’s been scoring in the paint and on the perimeter. That’s a weapon we haven’t had. He’s a scoring machine and he kept us in this game … some of it is explainable, some of it isn’t. The unexplainable is that his legs are under him. This kind of thing happens with seniors this time of year. They know one game that goes by is one less game you’re going to play in. He’s got that now or never mentality. Now is now. He played on both ends of the court tonight. It’s clicking with him.”

Despite an 11-point first quarter for Southern, Oxford found itself down 6-0 right off the bat and eventually trailed 24-17 after eight minutes.

“We dug a huge hole during that first quarter,” Tyler said. “It was deja vu. We had some of the same looks as we had our previous game against Hernando. We were physically and mentally absent from the game. To know we can go in at halftime and score the first eight points coming out, that’s a good thing.”

A large part of their early defensive struggles came from second chance points and Horn Lake’s Kareem Thompson scoring from every angle. Thompson had a game-high 34 points on the night.

“(Thompson) was definitely a challenge,” Tyler said. “He’s long, he can get to the rim and he can knock down threes. He hurt us as we subbed and got in the 2-3 zone and just lost him. We tried something different and disrupted what they wanted to do. He didn’t touch it a couple times down the court. Then we took some of their scoring machines out of the way by defending in trips.”

After a first half knotted at 35-35, the Chargers gradually created separation and later had an 11-point lead in the fourth quarter. Thompson and company tried to will their way back to a one-score game with two minutes left, but Oxford made free throws and contested a couple of desperate shot attempts to seal the deal.

The Oxford Lady Chargers controlled the pace of the game early and used it to get out to a 25-6 lead early in the second quarter, culminating in a massive 52-30 win over the Lady Eagles.

Despite Horn Lake clawing their way back into the game with a 10-0 run to end the first half from full court pressure, Oxford stayed the course and strung together some runs of good basketball the rest of the way.

“That first quarter, we played about as well as we had all year,” OHS head girls basketball head coach Cliff Ormon said. “The intensity on defense was great. We were moving to each pass and hitting shots in the first quarter. The second quarter, they went back to that full court press and gave us trouble. Props to them, they played great despite one of their best players being out. Overall, good win. We needed it.”

Miracle Joiner and Keyunna Tellis led the Lady Chargers with 14 points each while Audria Houston had 10.