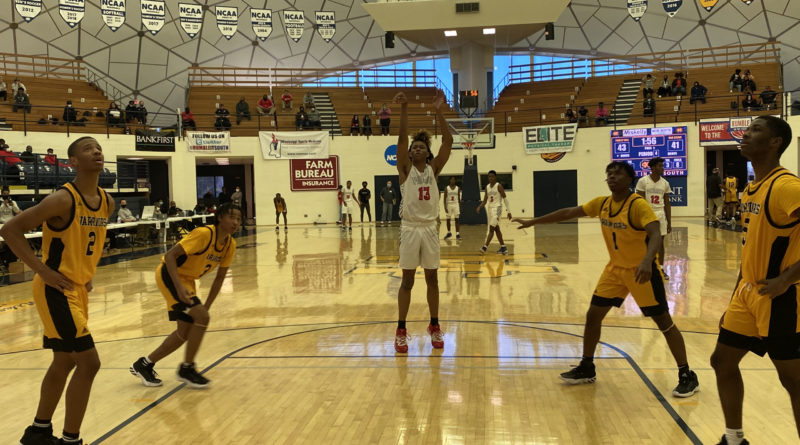 CLINTON — It wasn’t pretty, but Forest Hill coach Jerry Currie will take it.

Behind the play of Jayme Mitchell and George Marshall the Patriots were able to hold off a late Oak Grove rally to hand the Warriors their first loss of the season 47-45 at the Rumble in the South held at Mississippi College’s A.E. Wood Coliseum on Monday afternoon.

“We jumped on them early and then got complacent,” said Forest Hill coach Jerry Currie. “Oak Grove is a very resilient team and they played hard all the way to the end.”

The Patriots jumped out to an 11-1 lead the end of the first quarter. Mitchell had nine points in the opening quarter.

The second quarter saw scoring come at a premium with Forest Hill shooting just 2-for-7 (28 percent) and Oak Grove 2-of-9 (22 percent).

The Patriots headed into halftime up 19-7.

To begin the third quarter, Forest Hill extended their lead out to 24-13, but Oak Grove’s Jay Barnes scored the Warriors’ next eight points to cut the lead to 24-21.

Barnes made a lay-up with just over a minute left in the quarter to tie the game at 28-28, but Forest Hill’s Gemari Marshall hit a three-pointer with two seconds left to give the Patriots a 31-29 lead headed to the final period.

The Warriors rallied once more to tie the game at 41-41 on a lay-up by Tyrus Crump, but a Kelton Burk lay-up and a three-point play by George Marshall gave Forest Hill a 46-41 lead with just over a minute left.

Oak Grove cut the lead down to one at 46-45 with 47 seconds left as Crump made two free throws.

George Marshall made a free throw with 11 seconds to give Forest Hill a 47-45 lead and the Oak Grove potential game winning three-point shot bounced off the front of the rim at the buzzer.

“We missed too many free throws and offensive rebounds and that’s what gave them chances, but I’ll take an ugly win over a pretty loss,” Currie said. “Jayme has stepped for us all season and he did today even though he missed some free throws and lay-ups.”

Jayme Mitchell had 18 points and 10 rebounds to lead Forest Hill and was named the game’s Most Valuable Player.

“I feel like we could’ve played a whole lot better but we fought to the end and came out with a win,” Mitchell said. “We have a goal to win a state championship and we got work to do and have to get better.”

Mississippi Valley State commit Barnes had a game-high 23 points to lead Oak Grove, while Crump added 13 points for the Warriors (9-1).