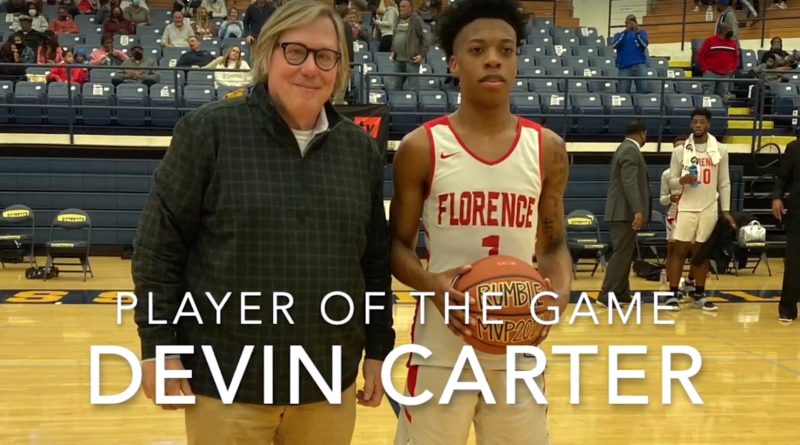 Florence’s explosive guard poured in a game-high 37 points as Florence got past Hartfield Academy 62-44 at the Rumble In The South held at Mississippi College’s A.E. Wood Coliseum on Monday afternoon.

“I think we didn’t play particular well,” Florence coach Darrin Chancellor said. “We didn’t defend like we wanted to and didn’t get as many transition baskets like we wanted. But Devin is playing with a chip on his shoulder. He didn’t make dandy dozen, so he’s using that as motivation.”

Florence held a slim 10-5 lead at the end of the first quarter, but started to create some separation in the second period. The Eagles began to pull away late in the first half, and Carter hit a three-pointer at the buzzer to give Florence a 28-15 lead at halftime.

The Eagles’ lead grew to 17 points by the end of the third quarter, with Florence holding a 42-27 advantage.

Hartfield cut the lead down to nine at 49-40 with just under four minutes to go on a three-pointer by Jonah Caldwell, but Florence ended the game on a 13-4 run to seal the win.

Carter scored 16 of the Eagles’ 20 points in the fourth quarter.

“It was pretty solid as far as my performance and just come out and attack them,” Carter said. “The game plan was to attack them early and keep the lead.”

“We still got to be better in a lot of areas, especially defensively,” Chancellor said. “We’ve had a couple key guys out sick, but they’re back and now it’s about conditioning and staying the course.”

Jonathan Lucas had 18 points to lead Hartfield Academy, while Jake Jesiolowski added 15 points for the Hawks (18-6).