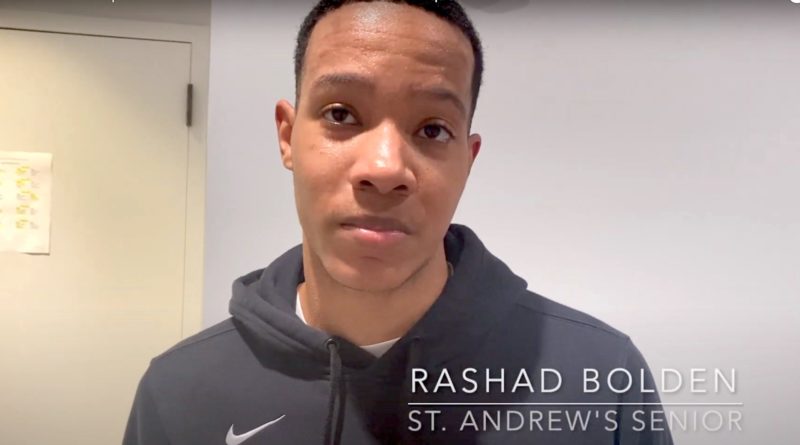 The Saints pulled away from Region 6-3A rival Velma Jackson late en route to a 57-40 win to complete the regular-season sweep of the Falcons for the first time ever.

“We were talking about that in the locker room,” St. Andrew’s coach Russell Marsalis said. “That was big for our guys. We’ve had some battles over the past couple of years, these two teams, but they do a great job over there and it’s always fun when these two programs get together.”

St. Andrew’s splendid guard Rashad Bolden had another big game, going for 24 points just three nights after going for 28 in the first win over the Falcons Tuesday night. That game was a little closer at 63-49.

St. Andrew’s outscored the Falcons (2-4) 16-12 in the third quarter, then completely dominated the fourth quarter 17-5. Bolden was phenomenal down the stretch, dishing out a couple of assists to go with 12 second-half points.

In the fourth quarter, he looked to the corner and found his wide open fellow senior Michael Davis, who buried a three-pointer that put the Saints ahead 50-35 win just under four minutes to go.

That shot brought the St. Andrew’s faithful to their feet, but it also put a big smile on Bolden’s face as he trotted back down the court.

“For some guys, shooting is just not what their role is or what they are asked to do,” Bolden said. “But when they are open like that and they knock down a shot, it’s the best feeling because it’s like a reward for hustling and rebounding and playing defense. I love to see that and that’s a big part of what we do.”

So the Saints are winning and having fun doing it. Friday’s win was their sixth in a row. Securing the season sweep over Velma was just icing on the cake, especially considering one of these two teams has won the state championship in each of the past four seasons.

“We’re still feeling ourselves out in a way,” Marsalis said. “We’ve had a couple of games canceled, but I feel like really the last three games we’ve kind of found our rhythm. Rashad’s always ready to go for the most part, but some our other guys — Jake Dowdell is shooting the ball really well for us and Javion Johnson is playing some big minutes too. So we’re trying to get all those guys going at once, and if we can do that, we’re tough to guard.”