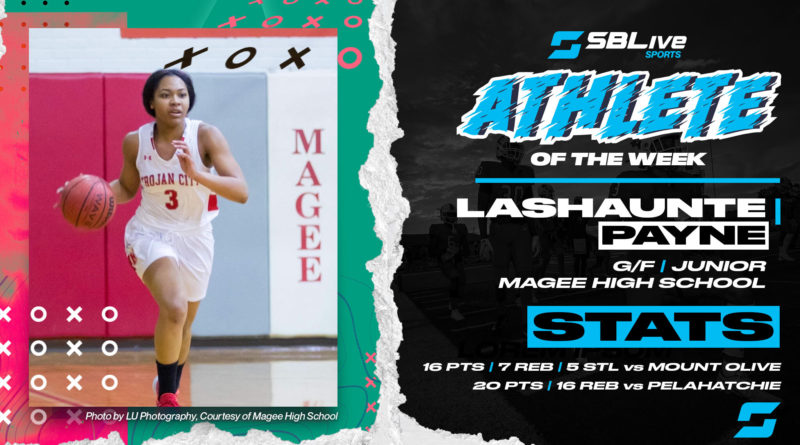 LaShaunte scored 16 points with seven rebounds and five steals in a 63-28 win over Mount Olive and turned in a double-double with 20 points and 16 rebounds in a 64-48 win over Pelahatchie.

LaShaunte received 38.48% of the vote, beating out Loyd Star’s Aubrey Britt who finished with 37.82%. Neshoba Central’s Hama’ya Fielder finished third 12.29% and Moss Point’s Michaela Payton was fourth with 8.33%. There were more than 40,800 votes tallied this week!

We are currently accepting Player of the Week nominations for the week of Dec. 14-20. If you would like to nominate an athlete, please email regan@scorebooklive.com or tag us on Twitter or Instagram at @sblivems.

Here are the other athletes who were nominated for Dec. 7-13:

Kaileigh Bilbo, St. Martin: Scored 22 points to go along with three assists and four steals in a 49-28 win over Pass Christian.

Aubrey Britt, Loyd Star: Scored 30 points to go with eight rebounds and five steals in a 56-49 win over North Pike and then scored 15 points with three assists and three steals in a 55-36 loss to Sumrall.

Samya Hamilton, Bay Springs: Put up a double-double with 13 points and 15 rebounds in a 50-38 win over Pelahatchie and chipped in five points to go along with 14 rebounds in a 43-42 win over Lake.

Mackenzie Lewis, Laurel: Recorded a double-double with 11 points and 12 rebounds to go along with two assists and four steals in a 36-24 win over Oak Grove.

Michaela Payton, Moss Point: Recorded a double-double with 13 points and 16 rebounds in a 36-17 win over Gautier, and averaged 10.5 points and eight rebounds in two more wins over Pascagoula and Jefferson Davis County.