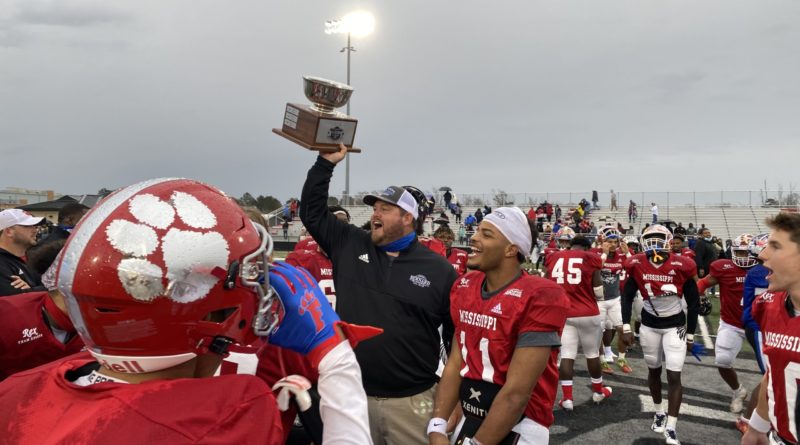 BRANDON — South Mississippi’s best ended the 2020 football season in style Saturday, beating their counterparts from the North in a 16-10 win in the Bernard Blackwell All-Star Game at Brandon High School.

The defenses were a little bit ahead of the offenses after a hectic week of preparation that included two-a-days each day, but the game heated up in the second half.

The North took a 3-0 lead on a 24-yard field goal off the foot of Warren Central’s Josh Griffin and held the South scoreless for 23 out of the 24 minutes in the first half.

The lone score for the South in the first half came with just 10 seconds left on the clock, when West Jones QB Alan Follis connected with Taylorsville receiver Tyrese Keyes for a 17-yard touchdown.

Keyes took a big shot from French Camp’s Calvin Johnson after catching the ball at the 1-yard line, but found a way into the end zone to put the South ahead 7-3 at the half.

The South All-Stars picked up right where they left off in the second half. They got a short field on their first possession via a 35-yard punt return from Raleigh’s Margro Perkins, and cashed it in with a 29-yard field goal off the foot of Gulfport’s Tres Ladner.

Perkins made another big play later in the third quarter when he picked off Ridgeland’s Zy McDonald on a deep ball over the middle of the field deep in South territory.

Two plays later, Follis saw Magee’s Cayden Bridges sprinting down the sidelines and hit him in stride for a 68-yard pass down to the North 6-yard line. Laurel’s Xavier Evans scored on the next play with a tough run up the middle.

“We just took advantage of what they were doing,” Follis said. “We took what they gave us, took some shots and we connected on a couple of them. We just had to come out on offense. .. because we wanted to win.”

Follis completed seven of his 12 pass attempts for 128 yards – with the one touchdown – to earn MVP honors for the South offense.

That score cut the South’s lead to 16-10 with 6:46 to go, and the boys from the North had their chances to win the game after a quick three-and-out from the South on the ensuing possession.

The North All-Stars got the ball back with just under 3:30 left on the clock, but got behind the chains with a holding penalty and wound up turning the ball over on downs at their own 37-yard line.

The South picked up a couple of first downs and milked the final two minutes off the clock, ending the game inside the North’s five-yard line.

Weir was a bright spot on an otherwise long day for the North offense, completing 11 of his 20 pass attempts for 110 yards and the touchdown. He took home offensive MVP honors for the North team.

“Coach (Chris) Cutcliffe and coach (Wade) Tackett put together a game plan for us and it worked out well. Unfortunately, we weren’t able to get the win. I thought we played well together and I wish we had another shot at it.”

Weir, who led Tupelo to a 5-4 mark in the nine games the Golden Wave were able to play this season, said he was looking forward to making a decision on where he’ll play his college ball in the next two months.

“(This week) has been fun – just hanging out and meeting new players from across the state,” he said. “Especially the guys from the North. We have a great group of players and a lot of talent. It’s been cool just getting to hang out and meet with them and forming this super team.”

The game took place Saturday after an unorthodox week of preparation. With COVID-19 protocols in place, players and coaches were asked to commute to two designated practice locations each day over the past week.

“Three months ago I honestly didn’t think we were going to be able to play this game,” Mims said. “The way things were going I just didn’t think we’d be able to deal with the logistics of holding this type of event with folks coming from all over the state. I have to give credit to our coaches who drove their guys back and forth every day and did such a good job of keeping everyone as safe as possible and making this a reality.”