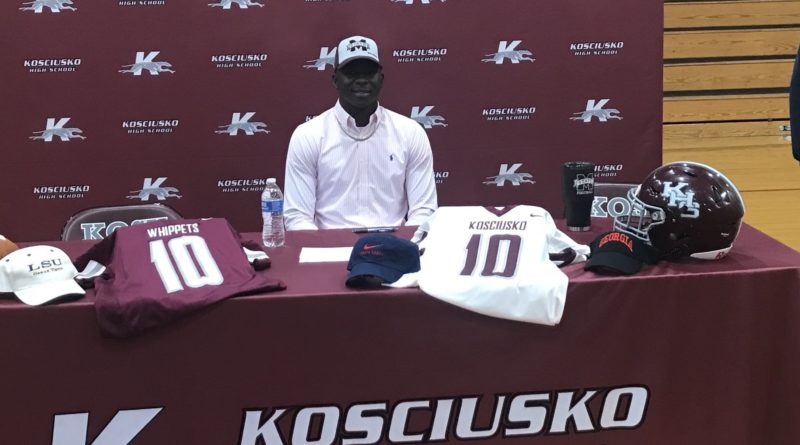 JACKSON — The 2021 class of wide receivers in Mississippi was one for the ages, and many of them signed letters of intent on Wednesday to play college ball.

The good news for Magnolia State football fans is most of that talent is staying right here.

Harmon chose Mississippi State over Ole Miss, while Buckhaulter flipped from the Bulldogs to the Rebels in the last week.

“I know I can fit in that system well and it fits my skills set,” Harmon told reporters from 247sports.com. “I can go get the ball and I love the way they throw it around. It is crazy to see their offense now and they throw it 80 percent of the time. That was a lot different than their offense when (former Bulldog head) Coach Joe Moorhead offered me.”

Southern Miss did very well with in-state receivers as well. After Second-team all-state quarterback Ty Keyes announced his decision to switch his commitment from Tulane to Southern Miss, the receivers started to follow.

The Golden Eagles got letters of intent from Petal three-star wideout Jeremiah Robinson and Ridgeland three-star receiver Richard Mays. Robinson had been committed to USM since Oct. 25, but Mays flipped from UL-Monroe to Southern Miss on Tuesday.

Prospective college football stars from Mississippi signed with schools across the country on Wednesday during the first day of the early signing period for the class of 2021.

But not all of Mississippi’s talent stayed home.

For South Panola wide receiver Cam Wright, his decision to attend Memphis over the University of Virginia came down to his comfort level with the coaching staff and his “fit” academically.

“I really made my decision after a visited Memphis last January,” Wright said. “It felt like home, but at the time, I thought Memphis was too small for me. Then I got on a zoom call with he coaches and my parents on Monday and they laid out what they could do for me academically and my dad looked at me and said ‘Are you ready?’ I committed the next day and signed today.”

Wright was one of a handful of wide receivers from Mississippi to make their college choice official Wednesday, and he wasn’t the only one to sign with an out-of-state school.

Southaven’s four-star receiver Isaiah Brevard signed with Oregon, which he said had been his dream school since he was young.

“I grew up watching those teams with Legarrette Blount and Marcus Mariota and I always wanted to go there,” Brevard said. “And it wasn’t just about the jerseys. I really have to thank God for this, because I’ve known this was coming, but just to make it a reality with my family there with me, it really is a dream come true.”

The State’s top wide receiver prospect — according to recruiting service 247sports.com — is Deion Smith, who transferred to Jackson Academy for his senior season after Provine opted out of playing football in 2020 along with the rest of JPS.

He honored his long-time commitment to LSU when he signed up to become a Tiger shortly after noon Wednesday.

2021 prospects who elect not to sign during the early period will announce their college choices in February during the regular signing period.