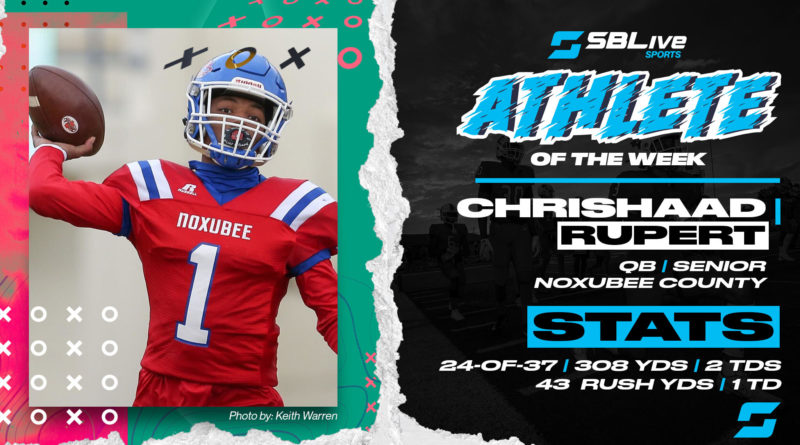 Rupert received 31.26% of the vote, beating out Lumberton RB Robert Henry who finished with 19.18%. Louisville WR Jarvis Rush finished third 16.26% and Biggersville QB Goldman Butler was fourth with 10.51%. There were more than 33,000 votes tallied this week!

We are currently accepting Athlete of the Week nominations for the week of Dec. 7-13. If you would like to nominate an athlete, please email regan@scorebooklive.com or tag us on Twitter or Instagram at @sblivems.

Here are the other athletes who were nominated for Nov. 30-6:

Jaylen Aborom, Oak Grove CB: Aborom stepped in front of a screen pass from Oxford QB Michael Harvey deep in Oxford territory and took it 16 yards the other way for a touchdown to tie the game at 21-21 in the fourth quarter of Oak Grove’s 29-28 win. (GAME STORY + PHOTOS)

Kabe Barnett, Oak Grove QB: Barnett was 21-of-30 for 199 yards and rushed 16 times for 45 yards to lead Oak Grove to a thrilling 29-28 win over Oxford in the 6A title game. Barnett scored on a 10-yard run with seven seconds left to pull Oak Grove within a point, then converted the game-winning two-point conversion on a pass to Trayvon Moore. (GAME STORY + PHOTOS)

Goldman Butler, Biggersville QB: Butler was 10-of-14 for 113 yards and a touchdown and rushed for 51 yards and another TD in Biggersville’s 20-14 loss to Lumberton. (GAME STORY + PHOTOS)

Karson Evans, Taylorsville LB: Evans picked off a pass and led Taylorsville with 10 tackles in their 42-0 victory over Calhoun City. (GAME STORY + PHOTOS)

Alan Follis, West Jones QB: Follis played nearly flawless in West Jones’ 33-27 win over West Point. He finished the night 14-of-18 passing for 215 yards and added 65 yards on the ground with a touchdown. (GAME STORY + PHOTOS)

Xavier Franks, Magee WR: Xavier Franks had four grabs for 56 yards and a touchdown in Magee’s 49-26 win over Noxubee County.

Jace Hudspeth, Louisville QB: Hudspeth was 24-of-40 for 273 yards and a touchdown, and also rushed for a TD to lead Louisville to a 15-14 win over Poplarville in the 4A state championship game. (GAME STORY + PHOTOS)

Ty Keyes, Taylorsville QB: Keyes was as good as ever in the finale to his near-historic high school career, completing 13 of his 20 passes for 217 yards and three touchdowns and adding another score on the ground.

Rodney Parker, Lumberton QB: Parker threw for 84 yards — including the game-winning 42-yard TD pass — and rushed for 51 yards in Lumberton’s 20-14 win over Biggersville.

Chandler Pittman, Magee QB: The 3A Mr. Football winner racked up 345 yards of total offense, accounting for five touchdowns and lifting the Trojans to a 49-26 win over Noxubee County and the program’s first football state championship in two decades.

Jeffery Pittman, Taylorsville RB: Pittman was named MVP of the 2A Championship after racking up more than 200 yards of total offense and scoring two touchdowns in a 42-0 win over Calhoun City.

Tajrick Randolph, West Jones WR: Randolph caught five passes for 104 yards to help lead West Jones to a 33-27 win over West Point in the 5A championship.

K’nylan Willis, Lumberton WR: Willis had five catches for 59 yards, including a 42-yard game-winning touchdown catch with 24 seconds to play to lift Lumberton to a 20-14 win over Biggersville. Willis also rushed for a touchdown.