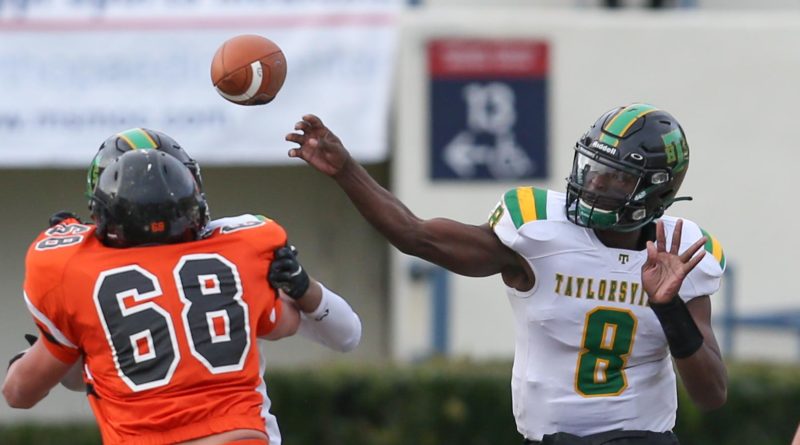 From Magee quarterback Chandler Pittman to Lumberton running back Robert Henry, there were multiple standout performances in Friday’s and Saturday’s 2020 MHSAA football state championship games. Here’s a look at the top performers:

Aborom stepped in front of a screen pass from Oxford QB Michael Harvey deep in Oxford territory and took it 16 yards the other way for a touchdown to tie the game at 21-21 in the fourth quarter of Oak Grove’s 29-28 win. (GAME STORY + PHOTOS)

Barnett was 21-of-30 for 199 yards and rushed 16 times for 45 yards to lead Oak Grove to a thrilling 29-28 win over Oxford in the 6A title game. Barnett scored on a 10-yard run with seven seconds left to pull Oak Grove within a point, then converted the game-winning two-point conversion on a pass to Trayvon Moore. (GAME STORY + PHOTOS)

Bridges caught five passes for 50 yards, rushed for 25 yards and a touchdown and intercepted a pass on defense in Magee’s 49-26 win over Noxubee County. (GAME STORY + PHOTOS)

Evans picked off a pass and led Taylorsville with 10 tackles in their 42-0 victory over Calhoun City. (GAME STORY + PHOTOS)

Follis played nearly flawless in West Jones’ 33-27 win over West Point. He finished the night 14-of-18 passing for 215 yards and added 65 yards on the ground with a touchdown. (GAME STORY + PHOTOS)

Fowler Jr. caught five passes for 94 yards and a touchdown in Noxubee’s 49-26 loss to Magee.

Xavier Franks had four grabs for 56 yards and a touchdown in Magee’s 49-26 win over Noxubee County.

Henry rushed 27 times for 111 yards and a touchdown in Lumberton’s 20-14 win over Biggersville.

Hudspeth was 24-of-40 for 273 yards and a touchdown, and also rushed for a TD to lead Louisville to a 15-14 win over Poplarville in the 4A state championship game. (GAME STORY + PHOTOS)

Johnson caught six passes for 115 yards and a touchdown in Oxford’s 29-28 loss to Oak Grove.

Keyes was as good as ever in the finale to his near-historic high school career, completing 13 of his 20 passes for 217 yards and three touchdowns and adding another score on the ground.

Parker threw for 84 yards — including the game-winning 42-yard TD pass — and rushed for 51 yards in Lumberton’s 20-14 win over Biggersville.

The 3A Mr. Football winner went wild Friday afternoon at Veterans Memorial Stadium, racking up 345 yards of total offense, accounting for five touchdowns and lifting the Trojans to a 49-26 win over Noxubee County and the program’s first football state championship in two decades.

Pittman was named MVP of the 2A Championship after racking up more than 200 yards of total offense and scoring two touchdowns in a 42-0 win over Calhoun City.

Pruitt paced the West Jones offense with 23 carries for 70 yards and three touchdowns in their 33-27 win over West Point.

Randolph caught five passes for 104 yards to help lead West Jones to a 33-27 win over West Point in the 5A championship.

Rush caught five passes for 75 yards, including the game-winning 24-yard TD reception with 36 seconds left, to lift Louisville to a 15-14 win over Poplarville.

Swann rushed 10 times for 92 yards and a touchdown in Poplarville’s 15-14 loss to Louisville.

Willis had five catches for 59 yards, including a 42-yard game-winning touchdown catch with 24 seconds to play to lift Lumberton to a 20-14 win over Biggersville. Willis also rushed for a touchdown.