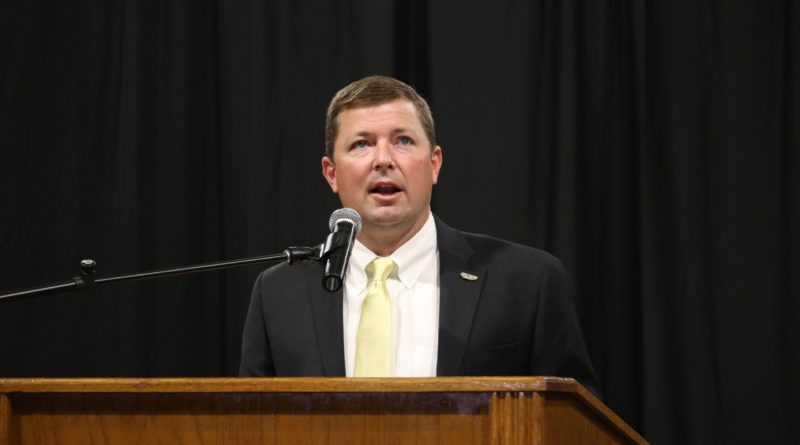 HATTIESBURG — Will Hall pledged Monday before a COVID-appropriate group of Southern Miss fans and media to re-establish the school’s traditional recruiting base of South Mississippi, South Alabama and Northern Louisiana.

Hall, who recently left his job as offensive coordinator at Tulane, was introduced as the school’s 22nd head football coach at a press conference on the USM campus.

Hall is the son of highly successful Mississippi high school coach Bobby Hall, who retired in 2018 with a career record of 310-106 after 33 years with stints at Raleigh, Amory, Louisville, Wayne County, Madison Central and Biloxi.

The elder Hall was one proud father Monday.

“Every afternoon from the day the school bus first dropped him off in kindergarten, he was with me at the field house,” Bobby Hall said. “I guess I marked him up pretty well. We’re alike in a lot of ways, but one area where it really sticks out is that we both knew what we wanted to do from an early age and believe that’s what God put us here to do, and that’s coach football and be a molder of young men.”

The younger Hall inherits a Southern Miss program that is 2-7 headed into its final game of the season against Florida Atlantic this Thursday in Hattiesburg. He will be the fifth head coach in 10 years, not counting interims.

He spent a good portion of Monday’s press conference laying out what he wants to do with recruiting, harkening back to the Jeff Bower era in the late 90’s and early 2000’s when Southern Miss found success with projecting the potential of prospects who other recruiters might have overlooked or undervalued.

“When we are winning and doing it the way we’re supposed to, we’re recruiting well in Mississippi, Southern Alabama, parts of Louisiana and the pan handle of Florida,” Hall said. “I have connections and know just about everyone in those areas, and that will be what our roster is made up of predominantly.”

Hall added that he’ll recruit outside of that traditional area if the needs of the team extend beyond what’s available, but said there’s more talent right here in Mississippi than there has ever been.

“I know what it means to grow up in Bassfield or Bay Springs,” he said. “I can name last names from these small towns … although I can’t do it now without committing NCAA violations … but I know if your last name is ‘this’ and you are from Calhoun City, it means you can play. If you grew up in Bruce Mississippi, I know you can still put on 40 pounds after high school.”

As an assistant at Tulane under coach Willie Fritz, Hall had served as the lead recruiter on several Mississippi prospects, most notably a pair of three-star recruits from the Pine Belt area — Taylorsville quarterback Ty Keyes and Laurel receiver Kanarius Johnson.

Both players made SBLive’s pre-season list of players to watch, and both put together solid senior seasons.

On Sunday, one day after Keyes led Taylorsville to a 42-0 win in the 2A State Championship and one day before Hall was introduced as the next Golden Eagle coach, Keyes announced his decision to de-commit from Tulane and reopen his recruitment.

Keyes said Monday via telephone that Southern Miss was already recruiting him before the news of Hall’s move to Southern Miss broke, and that it’s only increased since then.

“They have been on me pretty hard from the start,” Keyes said. “But I just got a message this morning from coach Hall telling me to check out his press conference.”