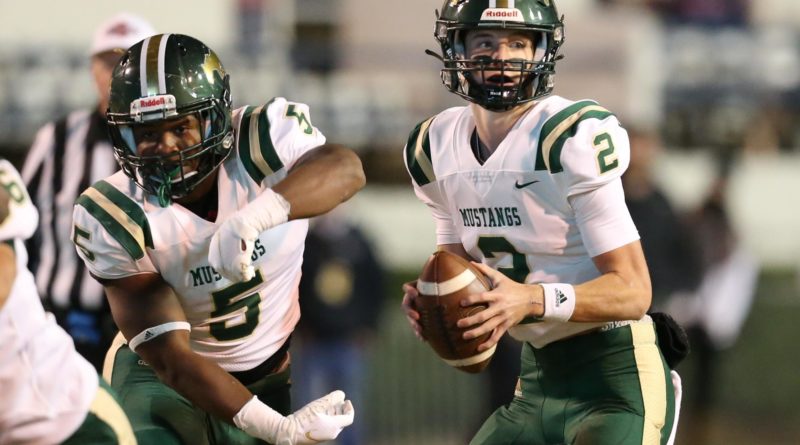 JACKSON — West Point’s reign of terror is over, and there’ s a new king of 5A football in the Magnolia State.

The West Jones Mustangs knocked off the four-time defending state champs in a wild and wonderful 33-27 shootout Saturday at Memorial Stadium in Jackson.

The Mustangs (13-2) broke a 27-27 tie with tailback Kentrell Pruitt’s third touchdown run of the night with 11:20 left in the fourth quarter, and hung on for the win, avenging a 2018 title game loss to this same West Point program.

“It means so much to this team and this community,” West Jones quarterback Alan Follis said. “We’ve worked so hard to get back here. We couldn’t get it done two years ago at Southern Miss, but we pulled through this year and we got the gold ball.”

“Pulled through” is the operative word there, but the Mustangs’ win was no fluke.

West Jones coach Scott Pierson and offensive coordinator Bud Blackledge stole a page out of Ridgeland High’s playbook from the North State title game last week, relying on the short-quick passing game on the exterior. Follis played nearly flawless. He finished the night 14-of-18 passing for 215 yards and added 65 yards on the ground with a touchdown.

“When they gave us room we got it out to the edge quick and let the guys make plays,” Follis said. “When they pressed us, we went over the top on them. Just taking what they gave us all night.”

Pruitt paced the Mustang offense with 23 carries for 70 yards. His first two touchdowns came in the first half, when West Jones put him in to take direct snaps in the power formation inside the five-yard line.

On the other side of the ball, West Point did what they always do with their smash-mouth, north-and-south running game. The Wave ran the ball 36 times for 151 yards. Cameron Young led the way with 70 yards on 14 carries with three touchdowns.

But that wasn’t enough. The Mustang defense did as good of a job slowing the Green Wave down as anyone has since the first month of the season, and when push came to shove, the reigning champs couldn’t throw it. Christopher Ivy completed just two of his five attempts for 25 yards and threw a crucial fourth-quarter interception to Deonta Crosby on the drive following West Jones’ go-ahead touchdown.

“It was just a play in the moment,” said Crosby, another West Jones senior. “Coach told me if I kept my eyes in the backfield, I was going to get burned, so I just played my man and I ended up in a position to make a play for my team.”

Crosby’s was one of a couple of dozen huge plays for West Jones. The Mustangs converted on six out of nine third down situations and were one-for-one on fourth down conversions.

The Mustangs also overcame a couple of big mistakes — they missed two extra points and a chip-shot field goal that would have put them ahead by nine points with a little more than five minutes left in the game.

But the biggest blunder came as they were up 20-7 and trying to run out the clock in the first half. West Point linebacker Tyun Robinson laid a huge lick on Pruitt and sent the ball flying in the air, and Antonio Facella scooped it up and raced 34 yards for the touchdown with just 41 seconds left in the half.

That cut the West Jones lead to 20-14 headed into the break, and the Green Wave evened it up after Trey Ryland opened the second half with an 80-yard kick return to the West Jones 1-yard line to set up Young’s second touchdown run.

But West Jones answered with a strong kick return of its own, and Follis led the offense 39 yards in five plays and delivered the response himself in the form of a five-yard touchdown run to regain the lead 27-20.

West Point tied it once more with a 13-play, 70-yard drive that Young capped with his third touchdown run of the night with three minutes left in the third quarter.

The Green Wave did not score in the fourth quarter. It crossed the 50-yard line on its final drive, but turned it over on downs when Ivy couldn’t connect with Ryland on a 4th-and-7 pass attempt.

“It was real special,” West Point senior defensive end Jaquarius Thomas said about the playoff run. “We had a lot of doubt on us, and a lot of people said we weren’t supposed to make it here. But we kept climbing and fought to get here, we just didn’t finish the mission.”