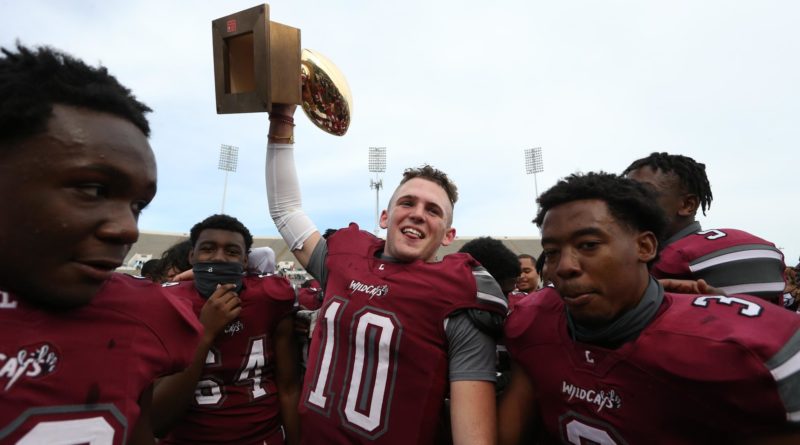 JACKSON — When the chips were down in Saturday’s MHSAA 4A Championship game, the boys from Winston County were at their best.

Down 14-7 late, Louisville drove 82 yards in 13 plays and scored with 36 seconds left on a 24-yard pass to Jarvis Rush, then converted a two-point conversion on a run by Jaden Triplett to beat Poplarville 15-14 and capture the 4A football state championship for the second time in three years.

“I just felt it,” Louisville coach Tyrone Shorter said of his decision to go for two. “It just seemed like the right call and the guys executed to perfection.”

The Wildcats (13-1) had struggled offensively for most of the game before the final drive. Their first score came in the first minute of the second quarter, when Hudspeth dove into the end zone from one-yard out to tie the game 7-7.

They couldn’t get anything going the rest of the game, punting once and turning it over on downs twice. The big problem for the Wildcat offense was the lack of a running game. Emory James led the way with 16 carries for 51 yards, but they gained just 60 yards as a team on 29 carries.

But the Wildcats found success throwing quick passes to the sidelines and letting those tall, athletic receivers make plays in one-on-one matchups.

Hudspeth was named the MVP of the game after orchestrating that final drive, which ate nearly six minutes off the clock with the Wildcats converting two fourth-and-long situations.

“We knew we had the players to do it,” Hudspeth said. “We missed a bunch of opportunities in the first half, and missed a couple in the second half, but when it counted, we came up big.”

The touchdown pass to Rush was the play of the game, and it came two plays after the junior receiver kept the team alive with a big catch on fourth-and-five at the Poplarville 27-yard line.

Rush ran a slant-and-go route and made a leaping catch over the out-stretched arms of Poplarville defender Jamaya Henry.

Rush finished the game with five catches for 75 yards. Sophomore Keyarrion Jackson led the Wildcats with nine grabs for 92 yards.

“I made some big catches there at the end, but it isn’t about me,” Rush said. “This was a great team win, and I didn’t want to be the reason that this senior class was the first one to lose in the state championship.”

The loss was devastating for Poplarville, which has now come up short in four of the last five 4A state championship games.

“I thought we ran the ball really well early in the game,” Poplarville coach Jay Beech said. “(Tyron) Holston and (Greg Swann) both had a big first half. We just gave them too many possessions in the second half. We didn’t sustain drives and if you give a team like Louisville that many chances to win the game, eventually they are going to do it.”

The Hornets (10-4) controlled the game for most of the afternoon. They went ahead 7-0 on the opening drive of the game, going 82 yards in 15 plays and eating 7:50 off the clock.

After Louisville responded, the Hornets got the first big play of the game on a 62-yard touchdown run from senior Greg Swann to go ahead 14-7 with 10:35 left in the second quarter.

But the Hornets never sniffed the end zone again. The Louisville defense showed up after halftime and shut them out in the final two quarters.

“They ran the ball well and they did a great job with what they were doing,” Louisville defensive end and reigning 4A Mr. Football Ty Cooper said. “They are a great ball team. We just had to come out in the second half, get into their backfield and make plays, and that’s what we did.”