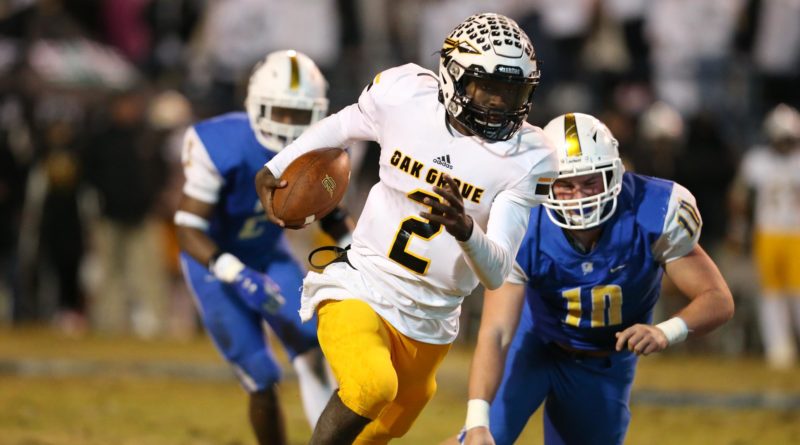 JACKSON — Last year in Hattiesburg, Oak Grove failed to hold on to a lead and it cost them a state championship.

On Friday night at Memorial Stadium, the boys from Lamar County returned the favor.

The Warriors scored with seven seconds left and converted a heart-stopping two-point conversion to beat Oxford 29-28 in an instant-classic of a 6A Football Championship Game.

Oak Grove coach Drew Causey said he made the decision to go for broke as soon as his Warriors got the ball back with 3:52 left, down 28-21. If they drove the field and scored, he told his offense, they were going to go for two and the win.

Twelve plays later, quarterback Kabe Barnett scored on a 10-yard run to pull the Warriors within one point with seven seconds left on the clock. True to to his word, Causey sent the offense back out there for the two-point conversion.

Barnett took the snap out of the shotgun, looked to his right, then threw back across the field to tight end Trayvon Moore, who made the diving catch to seal the win.

“That’s a play we practice all the time but don’t use that often,” Moore said. “We couldn’t get it to work earlier in the season, but we found it works much better if I really sell the block.”

He did, and it worked.

The play was the perfect culmination of a wild season in 6A football in Mississippi. The Warriors (13-0) and Chargers (12-1) were the only two undefeated teams remaining coming into Friday’s rematch of last year’s state championship game, which Oxford won 31-21.

Both teams were as-advertised in the first half, trading touchdowns back and forth and playing to a 14-14 tie.

Both teams made second-half adjustments that slowed down the opposing offenses in the third quarter. Oak Grove uncharacteristically turned the ball over on fumbles on back-to-back drives, and Oxford turned it over on downs and was forced to punt twice to start the second half.

Oxford finally broke the scoreless streak after the second Warrior fumble when Michael Harvey found D.K. Johnson on a jump ball in the corner of the end zone to cap an eight-play, 74-yard drive and put the Chargers ahead for the first time, 21-14.

Oak Grove still didn’t have a second-half score halfway through the fourth quarter, and for a while, it looked like the Warriors would never break through.

Luckily, they got the lift they needed from the defense. Cornerback Jaylen Aborom stepped in front of a screen pass from Harvey deep in Oxford territory and took it 16 yards the other way for a touchdown to tie the game at 21-21.

“That play really gave us life,” Causey said. “We needed a spark and that certainly did it for us.”

Harvey made amends on the next Oxford possession, leading the Chargers 64 yards in five plays and capping the drive with a 13-yard pass to tight end Alec Vaughn in the back of the end zone to put Oxford back on top, 28-21.

That’s when the Warrior offense went to work on that final, fateful drive.

And while a 12-play, 80-yard touchdown drive in less than four minutes sounds impressive, it’s what Oak Grove did all season. The Warriors took the No. 1 ranking after pre-season 6A favorite Starkville lost its first game halfway through the season, and never blinked.

The loss snapped a 24-game winning streak for Oxford, which lost for the first time since Sept. 30 of last year.

“I’m proud of our guys and what they accomplished this year,” Oxford coach Chris Cutcliffe said. “I told the guys before the game that I felt like we were playing with no pressure, because no matter what happened out here tonight, it wasn’t going to change anything about how we feel about them and what they’ve accomplished this season.”

Harvey played exceptionally well outside of the costly fourth-quarter interception. He completed 16 of his 23 pass attempts for 257 yards and three touchdowns. Tailback Omar Howell scrapped for all 72 of his rushing yards on 22 attempts against a tough front-seven from Oak Grove.

Oxford receiver D.K. Johnson had a huge first half, catching four passes for 101 yards. He only had two catches in the second half, but one of them was an 11-yard touchdown.

But Oak Grove was just a little bit better. Hattiesburg High transfer Courtland Harris paced the Oak Grove ground game with 58 yards on 11 carries, and Barnett finished the night 21-of-30 through the air with 200 yards and two scores on the ground.

The offensive line, which the Warriors had ridden all season, did not give up a sack.

“It got cold and we got cold to start the second half,” Causey said. “But we came back when it mattered and played well. We’ve been a second half team all season, and we finally got it going tonight.”