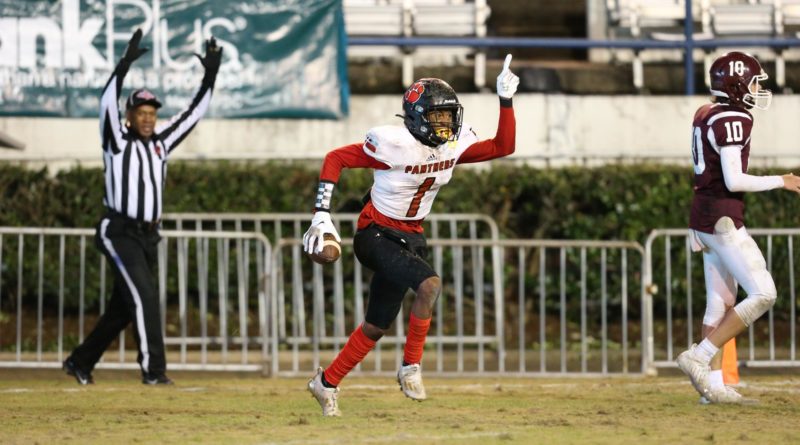 JACKSON – With 58 seconds remaining and the game tied, Lumberton needed a miracle.

And a miracle was what the Panthers got.

Senior K’Nylan Willis hauled in a 42-yard touchdown pass from quarterback Rodney Parker with 24 seconds to play, carrying Lumberton to a thrilling 20-14 victory over Biggersville Friday in the MHSAA Class 1A state championship game at Veterans Memorial Stadium.

It was the fifth state championship for Lumberton (12-1), adding another trophy to the ones won in 1983, 2004, 2005 and 2010. Biggersville, making its first state finals appearance, lost for the first time this season after 13 straight wins.

“This is so sweet,” said Lumberton senior running back Robert Henry, who finished with 113 yards on 26 carries and two touchdowns to earn Most Valuable Player honors for the game. “We just believed in ourselves.”

Things looked grim for the Panthers after Biggersville hit a big play — a 52-yard pass from Goldman Butler to Zae Davis set the Lions up at the Lumberton 2-yard-line. Butler then scored on a 1-yard plunge to pull Biggersville into a 14-14 tie with under a minute to play.

The Lions did not have a kicker, so they went for a 2-point conversion, and the pass from Dylan Rowsey was just out of the reach of John Eaton.

Lumberton took the kickoff at their own 41 with no timeouts remaining but elected to use what time was left to try for a score, rather than play for overtime.

“I just believed in our kids,” said Lumberton head coach Zach Jones. “When it was 14-14, I thought we’d get good field position. And we felt like if we could get K’Nylan in some one-on-one situations he would be big for us.”

A 6-yard pass to Willis and an 11-yard completion to Henry, sandwiched around a spike, put the ball at the Biggersville 42. Willis ran a straight go route down the right sideline past three defenders and Parker’s pass was right on the money in the end zone.

“We knew what we had to do,” said Willis, who spent much of the season sidelined with an injury. “We had the right play called, I just had to go out and get it.”

The game was a bitter pill for Biggersville, which fought back from a 14-0 halftime deficit, and saw its Cinderella season end short of victory.

“I just told the guys how proud I am of them,” said Lions coach Stan Platt. “We ask them to leave it all on the field, and that’s exactly what they did.

“There’s nothing I can say to make the pain of this kind of loss go away. They’re hurting right now; I’m hurting right now. But I think when we look back on this season, we can hold our heads high.”

In fact, Lumberton let opportunities to blow the game open in the first half slip through its fingers.

The Panthers took the opening kickoff of the game and drove methodically 60 yards on 11 plays, with Henry scoring on a 4-yard run. The PAT kick failed, but Lumberton had an early 6-0 lead.

After a three-and-out, the Panthers drove to what appeared to be a 22-yard scoring run by Henry, only to see the play brought back for a holding call, and two plays later Parker was sacked and stripped of the ball, giving the Lions a turnover.

Midway through the second quarter, Trevon Jessie picked off a pass at the Biggersville 25 and the Panthers cashed it in on a 9-yard run by Henry. The big play was a 7-yard keeper by Parker on fourth-and-1 to set up the score.

Biggersville came out after halftime with a game plan to slow down Henry on defense and attack the middle with Butler on offense, and had some success doing both.

The Lions took the opening kickoff of the second half and got a 26-yard return from Jathan Hatch to start their drive at the Lumberton 43.

Butler ran for 9 yards, then found Jarell Jones for a 23-yard pass play to the Panther 11. On fourth down, Butler found Rowsey open in the back of the end zone for a 7-yard touchdown pass. Zae Davis ran the conversion to cut the margin to 14-8.

And that’s the way it stayed until the final minute of the game.

Lumberton had two long drives that ended with fourth-down stops in Biggersville territory, one on a fake punt and the second on a 2-yard run by Henry that came up a yard short at the Lions 24 after the Panthers ate up half of the fourth quarter on a 14-play drive.

“Their defense was really tough, so we knew the line had to block good, and I had to just keep fighting,” said Henry. “I’m happy for Coach Jones, I’m happy for the team, and all these guys. I love them and I love all the coaches.”

The Panthers got a three-and-out, but were unable to move, and a good punt return by Davis gave Biggersville the ball at their own 44 with 2:15 to play, setting up the final thrilling finish.

After Lumberton’s go-ahead touchdown, the Panthers were unable to convert a two-point play, and the Lions ran a series of laterals on the kickoff to try to set up a big play. But the Panthers stopped it, and Butler was sacked on the final play of the game.

It was a tough ending to a fine game for Butler, who netted 55 yards on 21 carries and completed 10 of 14 passes for 113 yards. But he was sacked three times for 25 yards in losses.

For Lumberton, the victory wiped away the bad memories of last season’s championship disappointment.

“I don’t know what to say right now,” said Jones. “It’s got to soak in. This football game is big, and us winning this championship is huge for these kids. But in 10 years, I want these kids to be doing something successful.

“You can’t tell me that these kids don’t have pride, don’t have character to come back after we just took a gut punch down there to tie it up at 14-all, to get the stop then come back and win. That’s what I’m most proud of.”