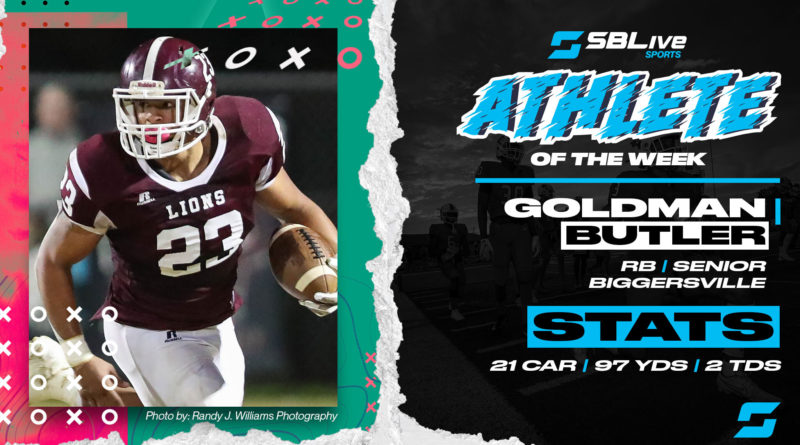 Congratulations to Biggersville running back Goldman Butler for being voted SBLive’s Mississippi High School Athlete of the Week!

Butler rushed for 97 yards on 21 carries and scored two touchdowns to lead Biggersville to a 26-0 win over Nanih Waiya on Nov. 27.

Butler received 34.5% of the vote, beating out Clinton WR Jordyn Battee who finished with 28.84%. Biggersville RB/DB Zae Davis finished third 19.03% and West Point RB Cameron Young was fourth with 9.54%. There were more than 30,000 votes tallied this week!

We are currently accepting Athlete of the Week nominations for the week of Nov. 30-Dec. 6. If you would like to nominate an athlete, please email regan@scorebooklive.com or tag us on Twitter or Instagram at @sblivems.

Here are the other athletes who were nominated for Nov. 23-29:

Thomas Clayton, Calhoun City ATH: Clayton had 115 yards from scrimmage — including the game-winning 46-yard TD reception late in the fourth quarter — to lift Calhoun City to a 22-14 win over East Union.

Zae Davis, Biggersville RB/DB: Davis carried the ball 10 times for 128 yards and two touchdowns and added an interception on defense in Biggersville’s 26-0 win over Nanih Waiya.

Courtland Harris, Oak Grove RB: Harris ran for 134 yards on 13 carries and 2 TDs, plus he caught a 25-yd pass for a score to lead Oak Grove to a 43-24 win over Northwest Rankin. — GAME STORY

Omar Howell, Oxford RB: Howell rushed 30 times for 211 yards and scored the game-winning touchdown with to lift Oxford to a 31-27 win over Clinton. — GAME STORY

Zy McDonald, Ridgeland QB: McDonald accounted for all three of Ridgeland’s touchdowns — two passing and one rushing — in their 29-22 loss to West Point. In the first half alone, McDonald was 11-of-12 for 148 yards. He finished 28-of-39 for 282 yards. — GAME STORY

Caleb Miller, Clinton QB: Miller threw for 236 yards and three touchdowns and carried the ball 26 times for 126 yards and another TD in Clinton’s 31-27 loss to Oxford.

D.J. Richardbey, Poplarville RB: Richardbey rushed 21 times for 115 yards and a touchdown to help lead Poplarville to a 35-6 win over Mendenhall.

Tristan Shorter, Oxford LB: Shorter had another huge game for the Chargers, scoring on a pick-six in the first quarter, then deflecting Clinton QB Caleb Miller’s final pass of the game to clinch Oxford’s 31-27 win over Clinton. — GAME STORY