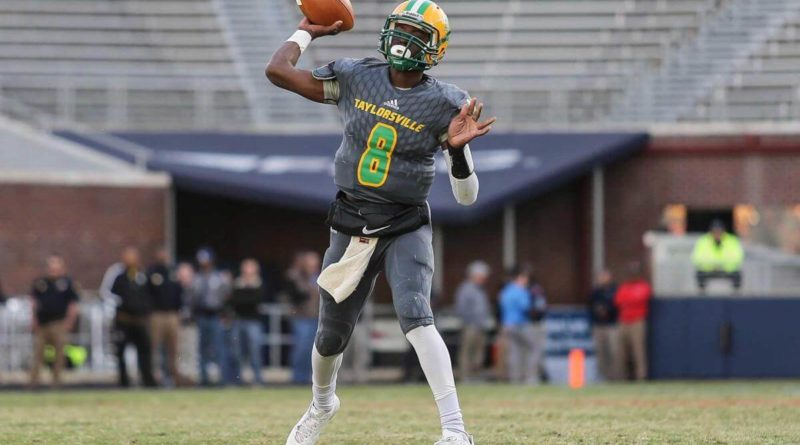 Here’s a closer look at the 2020 Class 2A MHSAA Football State Championship between Taylorsville and Calhoun City:

Nobody should be surprised that Taylorsville’s four-year starter at quarterback Ty Keyes and the other Tartar seniors are looking for their third championship in four years.

This group of 16 seniors has only lost three games in four seasons, including one earlier this year to West Jones, which is set to play for the 5A Championship Saturday.

“They make my job so much easier,” Taylorsville coach Mitch Evans said. “They are the type of group where you show them how to do it once, then you don’t have to hold their hands. When we come in here to lift on Monday and Tuesday, I just write the workout on the board and I never have to worry about it getting done or getting done right.”

The Taylorsville offense comes at you downhill like a flaming runaway wagon full of fireworks. Keyes would have likely broken the all-time passing yardage record if not for the shortened season, and the ground game has been just as potent with Keyes and tailback Jeff Pittman doing the heavy lifting behind a veteran offensive line.

The Tartars will head into Saturday’s game with an offense that averages 487 yards of total offense per game.

“It’s hard to prepare for a guy like Keyes,” Calhoun City coach M.D. Jennings said. “Everyone knows about him, but when you get to looking at film, the receivers he’s throwing to are really good players as well. We’re just going to have to play well in coverage and be disciplined up front.”

If Taylorsville is vulnerable, it’s on defense. The Tartars have given up four or more touchdowns in half of their 10 games this season. Their saving grace has been that they routinely score enough points on offense that it doesn’t matter.

“Calhoun City matches up well against us athletically,” Evans said. “They’ve won every game they’ve played since the third week of the season for a reason. They are big, well-coached and always seem to be in the right position to make a play.”

If not for staying power at Taylorsville, Lumberton and Bassfield, Calhoun City would be a blue-blood program.

The Wildcats can claim two state titles, but they’ve lost several others to those three programs over the years. And nobody knows that better than first-year coach M.D. Jennings, who played at Calhoun City before graduating in 2005 and going on to a four-year career in the NFL.

Following his retirement in 2015, Jennings spent two years as the defensive backs coach at South Panola before returning to Calhoun City as an assistant before the 2018 season. Flash forward two more years, and he’s the first-year head coach of a state champion contender at his alma-mater.

“We’ve had a lot of good players come through here over the years, and this season is no different,” Jennings said. “We only had 14 seniors and we only returned one starter on defense and two on offense, so there weren’t many people who gave us a chance to be here.”

That’s because many people didn’t know about the tandem of quarterback Jackson Lee and tailback Jaylen Artberry.

Those two have been a huge part of Calhoun City’s success this season. Combined, they account for nearly 83 percent of the Wildcats’ total offensive production.

“Jackson is a junior who a lot of people didn’t know about coming into the season,” Jennings said. “But he’s done everything we’ve asked him to do, and he can run and throw. When something needs to happen, he’s willing to put the team on his back and make a play. Jaylen is the same way, it’s just tougher to coach him up because he never comes off the field.”

Those two will need to be on point from the first whistle Saturday, because it may take 50 points to beat a Taylorsville team that averages 45.3 points a game.