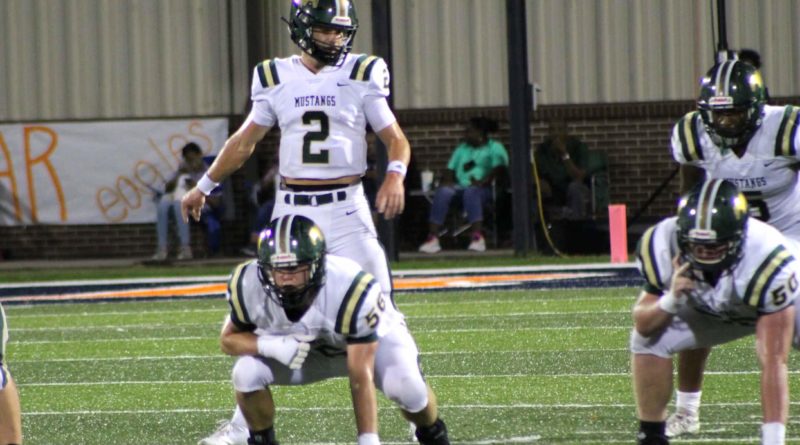 PASCAGOULA — West Jones withstood a Pascagoula comeback in the rain to edge past the Panthers 18-16 Friday night and advance to the Mississippi Class 5A football state championship.

The win sets up a rematch of the 2018 championship game with West Point, which the Green Wave won 27-12. After coming up short in the 2018 state championship, West Jones coach Scott Pierson said it isn’t enough to win South State this season.

“We went to Jackson two years ago,” he said. “All we got out of it was an extra week of practice and didn’t get rewarded for our hard work.”

The story of the game against Pascagoula was rain that made for a sloppy field. West Jones took advantage of several Panthers’ punting miscues to score all 18 of their points in the second quarter.

“That was the game,” Pierson said, who said the he couldn’t say the Mustangs won the game, but that they made fewer key errors on a wet night than Pascagoula. “It got wet and it got sloppy. We got a short field and we took advantage of it.”

For Pascagoula coach Lewis Sims, it was a question of what might have been.

“It was wet for both teams,” Sims said. “But, I wonder how it would have been if it wasn’t for the rain. I like our chances.”

Pascagoula (7-5) took an early 3-0 lead with a field goal midway through the first quarter. With just over eight minutes left in the second quarter, West Jones was forced to punt. Alan Follis hit a low line drive punt that Pascagoula declined to catch. The punt took a good roll and stopped on the Panthers 10 for a 56-yard punt.

West Jones (12-2) held Pascagoula to a 3-and-out. Marlon Lindsey fielded the Panthers punt on a bounce at the Pascagoula 36 and returned it to the 28. Follis found Zyauawn Williams at the Pascagoula 3 before Kentrel Pruitt put the Mustangs on top 6-3 with a 3-yard run.

Pascagoula’s next possession also ended with a three-and-out. West Jones blocked the punt, pushing the ball through the end zone for a safety and an 8-3 lead.

Lindsey gave West Jones good field position after the free kick, taking the kick from his 35 to the Pascagoula 19. Although the Mustang drive didn’t go anywhere, Joseph Hernandez extended the West Jones lead to 11-3 with a 32-yard field goal.

On Pascagoula’s ensuing drive, the Panthers again couldn’t pick up a first down and punted from their 35. The snap, though, sailed high and the Panthers managed to corral the ball at their three, giving West Jones another short field. Pruitt took the direct snap on the Mustangs’ first play and found a small opening on the right side of the line for the score as West Jones went into the half with an 18-3 lead.

In the second half, it would be Pascagoula capitalizing on West Jones errors. The Panthers kicked off, but the ball was mishandled giving them the ball at the Mustang 22. Keilon Parnell took the ball to the 3 on the first play of the drive before Cameron Deflanders took the ball in. The point-after attempt was blocked, but the Panthers had cut the Mustang lead to 18-9 just 36 seconds into the third quarter.

Pascagoula had a couple of chances to trim the West Jones lead in the third quarter, but turned the ball over on downs at the Mustangs 47 after driving from their 19, and had a pass picked off in the end zone by West Jones’ Antwoine Gavin to end another drive.

However, with 11 minutes left in the game, the wet ball finally bit the Mustangs as they punted from their 45. The ball sailed over Follis’ head and Pascagoula recovered at the 2.

Terrence Goodwin came in at quarterback for Pascagoula for an injured Parnell and used two plays to put it in the end zone to cut the West Jones lead to two, 18-16, but that’s as close as the Panthers could get.