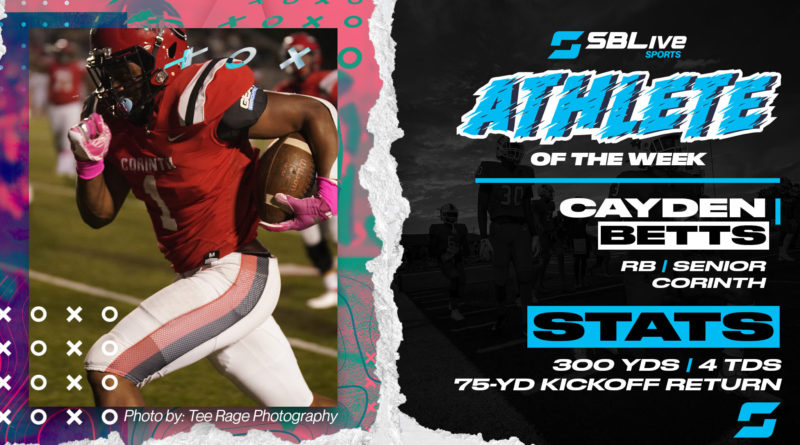 Betts scored four touchdowns -— including a 75-yard kickoff return — and racked up more than 300 yards from scrimmage in Corinth’s 35-20 win over Ripley on Oct. 23.

Betts received 44.56% of the vote, beating out Amory RB Charleston French who finished with 23.2%. Pearl QB Shade Foster finished third with 4.59% and North Panola DE Alex Gross was fourth with 3.64%.

We are currently accepting Athlete of the Week nominations for the week of Oct. 26-Nov. 1. If you would like to nominate an athlete, please email regan@scorebooklive.com or tag us on Twitter or Instagram at @sblivems.

Here are the other athletes who were nominated for Oct. 19-25:

Zy McDonald, Ridgeland QB: McDonald connected with Chandler Williams on a 17-yard TD pass play in the final minute to rally Ridgeland to a 33-29 victory over Neshoba Central. McDonald accounted for all five Ridgeland touchdowns — four TD passes and a 33-yard rushing TD.

Tristan Shorter, Oxford LB: Shorter snagged a one-handed interception and returned it 60 yards for a touchdown in Oxford’s 39-0 win over Olive Branch.

Khi Holiday, Tupelo Christian Prep QB: Holiday went 17-of-25 for 303 yards and seven TD passes through the air, and added 92 yards rushing and another TD on the ground in TCPS’ 57-0 win over Smithville on Thursday night.

Caleb Parten, Northwest Rankin QB: Parten threw three touchdown passes and led the Cougars on a game-winning drive in the final minutes that resulted in a 23-21 win over Pearl. Parten finished the night 16 of 32 for 232 yards.

Eli Smith, East Central RB: Smith, a sophomore, rushed 22 times for 186 yards and a touchdown to lead East Central to a 44-30 win over Pascagoula.

Caleb Miller, Clinton QB: Miller rushed 15 times for 89 yards and two touchdowns and threw for 105 yards to lead Clinton to a 31-16 upset of Warren Central.

Keilon Parnell, Pascagoula QB: Parnell went 15-of-32 for 294 yards and three touchdowns through the air, and added 141 yards rushinng and another TD on the ground in Pascagoula’s 44-30 loss to East Central.

Gage Peterson, St. Stanislaus College QB:Peterson completed 17 of 31 passing for 258 yards and 2 TDs in the Rock-a-Chaws’ 42-35 comeback win against Vancleave.

Jackson Parker, West Lauderdale QB: Parker accounted for four touchdowns and racked up 249 yards of offense — 132 passing and 117 rushing — to lead West Lauderdale to a 40-0 win over Choctaw Central.