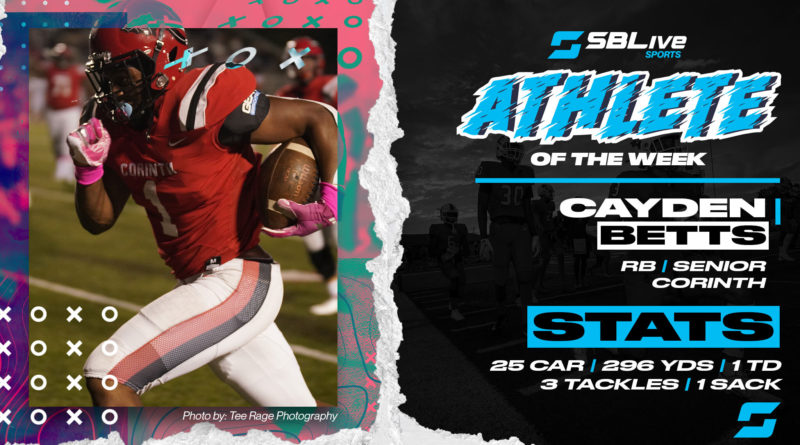 Betts had 25 carries for 296 yards and a touchdown, and added three tackles and a sack on defense in Corinth’s 23-18 loss to Itawamba.

Betts received 45.36% of the vote, beating out Hernando WR Reid Flanagan who finished with 24.44%. East Union W Hayden Roberts finished third with 17.16% and Madison-Ridgeland RB/S Rayf Vinson was fourth with 3.57%. There were more than 24,000 votes tallied this week!

We are currently accepting Athlete of the Week nominations for the week of Nov. 23-29. If you would like to nominate an athlete, please email regan@scorebooklive.com or tag us on Twitter or Instagram at @sblivems.

Here are the other athletes who were nominated for Nov. 16-22:

Kayvon Barnes, Pascagoula RB: Barnes carried the ball 18 times for 117 yards and one touchdown in Pascagoula’s 35-32 overtime win over Hattiesburg.

Cedric Bender, West Jones CB: Bender scored on a 99-yard fumble recovery — after forcing the fumble himself — and added a game-sealing interception late in the fourth quarter to help lift West Jones to a 42-21 win over Laurel.

Goldman Butler, Biggersville RB: Butler racked up over 300 yards of offense — including 42 carries — and accounted for five touchdowns to lead Biggersville to a 32-17 win over Tupelo Christian Prep.

Caden Chisolm, Pascagoula K: Chisolm, a sophomore, came up clutch in Pascagoula’s 35-32 overtime win over Hattiesburg. He booted a 35-yard field goal as time expired in regulation to tie the game at 32-32 and send it into OT. Then he nailed a 33-yard FG in OT to win the game.

Alan Follis, West Jones QB: Follis completed just six out of his 11 attempts, but they were all big plays. He finished the night with 205 yards passing and two touchdowns, and added 45 yards rushing with one touchdown on the ground to lead West Jones to a 42-21 win over Laurel. — GAME STORY

Zy McDonald, Ridgeland QB: McDonald had a huge game, completing 25-of-38 passes for 375 yards and three touchdowns to lead Ridgeland to a 32-29 win over Neshoba Central. — GAME STORY

Caleb Miller, Clinton QB: Miller rushed for two touchdowns — including the game-winner with just over a minute to play — and passed for another TD to lead Clinton to a come-from-behind 18-14 victory over Warren Central. — GAME PHOTOS

Reid Flanagan, Hernando WR: Flanagan caught 9 catches for 140 yards and 2 TDs in the Tigers’ 26-41 loss to the Oxford Chargers.

Daz Patton, Oak Grove LB: Patton had a pair of huge momentum-shifting plays, scooping up a pair of fumbles after sacks for touchdowns to help lead Oak Grove to a 41-14 win over Harrison Central. — GAME STORY

Chandler Pittman, Magee QB: Pittman led Magee to a 35-0 win over Raleigh, scoring his 100th career touchdown in the process.

Hayden Roberts, East Union WR/DB: Roberts had two interceptions and caught the game-winning touchdown pass to lead East Union to a 26-22 win over Northside and into the 2A North State Championship game.

Dexter Scott Jr., Laurel QB: Scott, playing a game just days after the death of his father, Dexter Scott Sr., completed 18 of his 33 pass attempts for 190 yards with one touchdown through the air and another on the ground in Laurel’s 42-21 loss to West Jones.

Rayf Vinson, Madison-Ridgeland Academy RB/S: Vinson rushed for 191 yards and three touchdowns on 20 carries and played spectacular defense from his safety position, breaking up several passes to lead MRA to a 41-14 victory over Jackson Academy in the MAIS 6A title game. — GAME STORY