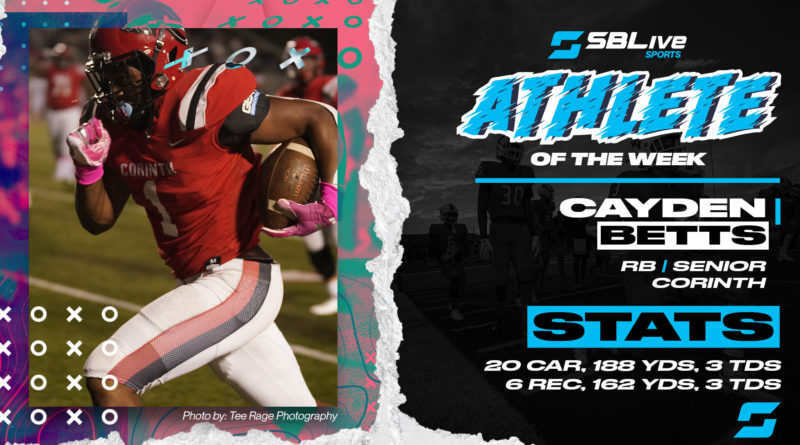 Betts scored a school record six touchdowns and racked up 350 yards from scrimmage to lead Corinth to a 52-39 victory over West Lauderdale. Betts rushed 20 times for 188 yards and 3 touchdowns and had 6 receptions for 162 yards and 3 more TDs.

Betts received 40.51% of the vote, beating out Corinth QB Brawner Cregeen who finished with 24.62%. Clinton RB Montavious Warren finished third with 16.2% and Union QB Kenyon Clay was fourth with 5.23%. There were more than 24,000 votes tallied this week!

We are currently accepting Athlete of the Week nominations for the week of Nov. 16-22. If you would like to nominate an athlete, please email regan@scorebooklive.com or tag us on Twitter or Instagram at @sblivems.

Here are the other athletes who were nominated for Nov. 9-15:

Justin Walley, D’Iberville RB: Walley carried the ball 16 times for 182 yards and three touchdowns to lead D’Iberville to a 33-31 win over Petal. He also caught two passes for 20 yards.

Shawn Wade, Hernando RB: Wade scored four touchdowns — including the game-winner with 3:16 left — to lift Hernando to a 36-33 upset of South Panola in the 6A playoffs.

Caleb Miller, Clinton QB: Miller completed four of six passes for 146 yards and two touchdowns, and he also carried the ball 12 times for 96 yards and two more scores to lead Clinton to a 35-7 win over Horn Lake.

Charleston French, Amory RB: Amory running back Charleston French carried the ball 32 times for 217 yards to lead Amory to a 27-26 victory over Choctaw County in the 3A playoffs.

Zy McDonald, Ridgeland QB: Zy McDonald threw the game-winning touchdown pass to Donovan Ball with less than 15 seconds to play to lift Ridgeland to a 36-28 victory over Lake Cormorant.

Tristan Shorter, Oxford LB: Shorter stuffed a potential game-tying two-point conversion by Madison Central with less than a minute to play, then recovered the onside kick to seal Oxford’s 25-23 victory.

Khi Holiday, Tupelo Christian Prep QB:Holiday was 14 of 18 for 190 yards and five touchdowns through the air, and added another TD on the ground in TCPS’ 62-0 win over Ashland.

Montavious Warren, Clinton RB: Warren had 13 carries for 105 yards and a 75-yard touchdown — on the first offensive play of the game — in Clinton’s 35-7 6A playoff win over Horn Lake.

Cam Marion, Northwest Rankin RB: Marion finished the night with 169 yards rushing on 29 carries to lead the Cougar offense in a 17-14 6A playoff win over Ocean Springs.

Brawner Cregeen, Corinth QB: Cregeen was 10 for 10 for 200 yards and three touchdown passes to help lead Corinth to a 52-39 win over West Lauderdale.

Kenyon Clay, Union QB: Clay passed for 161 yards and 2 touchdowns and rushed for 261 yards and 4 touchdowns to lead Union to a 64-44 2A playoff victory over Wesson.