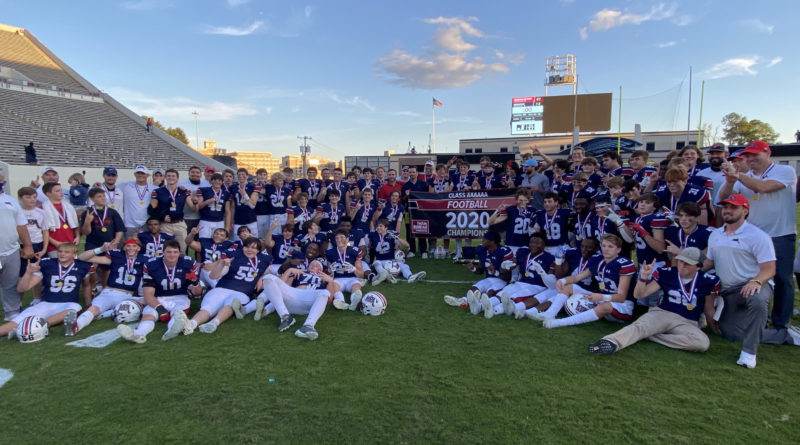 JACKSON — Madison-Ridgeland Academy coach Herbert Davis said before the 2020 season that last year’s championship run put the Patriot program on the map, but a repeat would cement its legitimacy.

Well, consider the Patriots for real.

“This one definitely puts us where we want to be,” Davis said. “Now we have to keep it going. You hate to be that one-and-done because we work so hard. I thought we were good enough to win back-to-back, but we had to go prove it, you know?”

And that’s just what the Patriots did. After whipping Presbyterian Christian School 42-14 in the play-in game, MRA did the same thing to Jackson Academy.

The Raiders (10-4) led just once in the game following a first-quarter touchdown pass from senior quarterback Jackson Conn to tailback Marcus Harris on a wheel route down the left sideline.

They held that 7-0 lead until the 10:20 mark in the second quarter, when MRA quarterback Zach Beasley led an impressive six-play, 67-yard touchdown drive that was sparked by passes of 30 and 21 yards on back-to-back plays. Beasley capped the drive himself with a 13-yard run to tie the game at 7-7.

After that, it was the Rayf Vinson show.

Vinson — MRA’s senior U.S. Naval Academy commit — was the big hero, with three touchdowns on the ground. Vinson finished the game with 191 yards on 20 carries and played spectacular defense from his safety position, breaking up several passes.

He needed only three plays on the next MRA drive to give the Patriots the lead. Vinson went 34 yards on the the first handoff, 17 on the second and two yards for the score on the third.

MRA added another second-quarter touchdown that was the real back-breaker for Jackson Academy just before the half. MRA got the ball back near midfield with 37 seconds left on the clock, and went 51 yards in four plays, aided by one pass interference call, for the score. Beasley found tailback Tyler Latham running wide open in the right flat for a seven-yard touchdown pass with just eight seconds left on the clock.

The Patriots scored touchdowns on three of their four second-half possessions as well — they sandwiched a 41-yard touchdown pass from Beasley to junior receiver Ty Brooks between Vinson’s second and third scoring runs of 15 and 22 yards.

After the game, Jackson Academy coach Lance Pogue pulled Vinson aside for a one-on-one conversation.

“You know, my dad is a veteran,” Pogue said. “So for a guy like him who is committed to one of the service academies, you gotta pull for that guy, especially with the way he plays the game. I told him I was proud of him, and that we’re all behind him.”

The berth in the championship game was the first for the Raiders since 2013.

They scored only once more in the game — a 5-yard run from Harris to start the third quarter — but that came after MRA led by four touchdowns. Harris was the lone bright spot, rushing 17 times for 109 yards with the both JA scores.

“They are really good and they deserve all the credit,” Pogue said. “Coach Davis has done a great job in the seven years he’s been there. We’ve only been here for a little less than a year, so we feel like we’re a little bit ahead of schedule just being here. The best is yet to come, and that’s what I told our guys.”