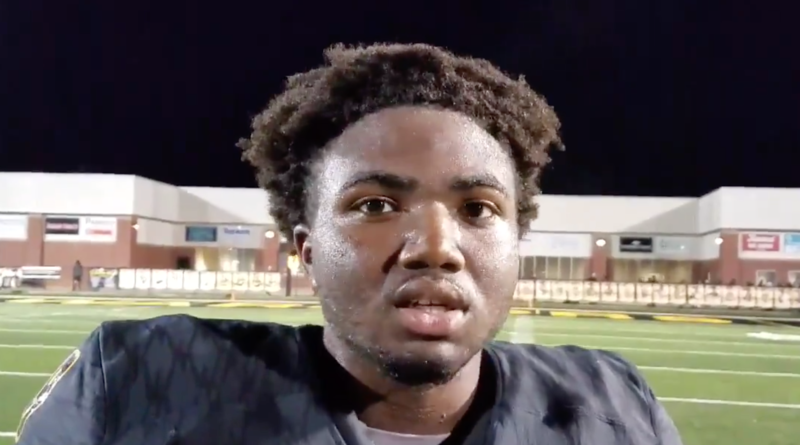 HATTIESBURG – After giving up 35 points last week against Biloxi, the Oak Grove defense came under some criticism from coaches and fans.

There will be no such criticism this week after a stellar performance in a 41-14 victory over Harrison Central Friday night in the second round of the Class 6A playoffs at Warrior Field.

The Warriors, ranked No. 1 in both the SBLive Power 10 and Class 6A rankings, remained undefeated at 11-0 and will host Northwest Rankin next week in the 6A South State finals. The Red Rebels finished the season 9-3.

“There was a lot of talk about our defense, how we’re not good enough to win a championship,” said senior linebacker Daz Patton. “We wanted to come out tonight to prove that we are by making plays, not letting them score and hitting them in the mouth.”

Patton certainly did his part as he was in the right place at the right time twice in the second half, scooping up a pair of fumbles after sacks for easy touchdowns.

The Warrior defense also employed a bend-but-don’t-break attitude, making stops on three fourth downs and shrugging off a pair of big plays in the passing game by the Red Rebels.

“I’m real proud of our whole team, the way they played, coaches too,” said Warrior head coach Drew Causey. “We challenged the defense this week, and they responded.”

The defensive effort was critical because the Red Rebels did an effective job against the Warriors’ vaunted passing game.

Harrison Central held junior quarterback Kabe Barnett to just 5 of 12 passing for 124 yards and a touchdown, and the Red Rebels dominated time of possession 29:21 to 18:39.

After a scoreless first quarter, Oak Grove scored first, on a 30-yard Michael Owens field goal set up by a 37-yard pass from Barnett to senior Raheem Fairley.

Harrison Central came right back, as sophomore quarterback Christian Turner connected with senior Jacobi Moore for a 75-yard reception to the Warrior 6-yard line. On the next play senior Jaidon McClain burst up the middle for a touchdown.

But on the next series, the Warriors began to find success on the ground. Starting at their own 46, Oak Grove needed just four plays to regain the lead for good. Senior Courtland Harris had a 15-yard run and senior Eugene Newell Jr. got the touchdown on a 31-yard run.

After a three-and-out, it was more of the same. Harris netted 46 yards on a broken-field run, Barnett picked up 11 on a bootleg play, then Newell had runs of 6 and 8 yards before Harris dove in for the score from a yard out.

“The first couple of series, I didn’t think we played real well,” said Causey. “Then we found something in there, and that’s what got us going when we were able to run the football. We were able to get to the edges a few times.”

The game turned on the opening possession of the second half, with Oak Grove leading 17-7.

After a false start put the Red Rebels behind the sticks, senior linebacker Zach Little burst in for a 10-yard sack on second down, then got another sack on third down, stripping Turner of the ball in the process. Patton picked up the ball and took three giant steps for a touchdown.

“We talked (at halftime) about not breaking down and containing,” said Little. “We worked in practice on getting containment, not looking at the feet, but looking at the hips. I thought the first half, we really didn’t do a good enough job.

“At halftime, we talked about, ‘we’ve got to contain, wrap up and make tackles,’ and I thought we did that in the second half.”

The first sack set up the second as Little picked up on a tell from the Red Rebels up front.

“I noticed what they were doing on the offensive line, kind of spying me, whichever way I was,” said Little. “So, I blitzed in the A-gap and it opened up.”

The play was the start of a tough second half for the Red Rebels’ quarterback, who was sacked four times for 57 yards in losses.

The Red Rebels did indeed get back in the game after their defense made a huge play, sacking Barnett for a 17-yard loss on third-and-8 from the HC 33.

Turner found Moore for a 49-yard touchdown that cut the Oak Grove lead to 24-14 with 11:25 to play in the game. It was the cap on a big night for Moore, who caught seven passes for 203 yards.

But Oak Grove demonstrated its big-play capability on the first play after the ensuing kickoff, as Barnett and Tyrell Pollard hooked up for a back-breaking 71-yard touchdown pass.

After the Warriors stopped Harrison Central twice on fourth down, Owens added a 47-yard field goal, then Patton added the coup de gráce with his second scoop-and-score from 9 yards out after the fourth sack of the game for the Warriors.

“This is probably the best game I’ve ever played,” said Patton. “Football is a team sport. Last week, we struggled on defense, but the offense picked us up.

“So, when they’re struggling to get it going, we know it’s our job to keep the other team from getting in a rhythm, and that helps up get the momentum. It’s give-and-take for both sides. It’s like a brotherhood.”

Now the Warriors get to practice on Thanksgiving, the reward for their season continuing. The task, though, is to defeat Northwest Rankin a second time, three weeks after winning at Flowood in the regular season finale.

“We’ve got a very tough team to play, a team we’ve got to play twice,” said Causey. “We’re going to have to have a great week of practice.”