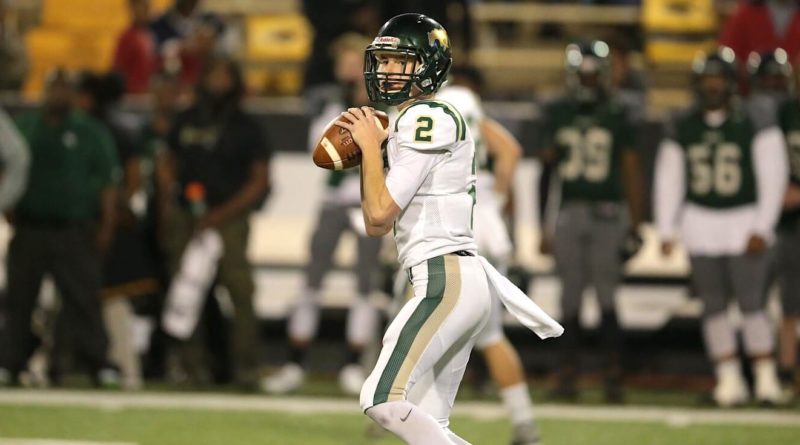 LAUREL — The third time was the charm for West Jones quarterback Alan Follis “between the bricks” at Laurel High.

After losing to their cross-county rival as the visiting team in 2018 and again earlier this year, Follis and the Mustangs are headed back to the 5A South State Final for the third year in a row after a dominating 42-21 win over Laurel Friday night.

“I lost here my sophomore year and we lost her earlier this year,” Follis said. “So it feels pretty good to get this one tonight. We’ve been hearing it all week — ‘You can’t win between the bricks’ — well, we just did.”

The Mustangs (11-2) will host Pascagoula (7-4) next Friday night. The winner will advance to the MHSAA 5A State Championship in Jackson.

If West Jones plays the way they did Friday night, they’ll be a tough out for the Panthers.

Follis completed just six out of his 11 attempts, but they were all big plays. He finished the night with 205 yards and two touchdowns, and added 45 yards rushing with one touchdown on the ground.

But the player of the game for West Jones was an unlikely hero — senior cornerback Cedric Bender.

After Follis hooked up with Marlon Lindsey for a 47-yard pass to set up the go-ahead touchdown early in the first quarter, Laurel trailed 7-6 and was looking to respond. But as quarterback Dexter Scott Jr. was diving towards the goal-line, Bender laid a lick on him and knocked the ball loose. He recovered the fumble, got back on his feet and sprinted 99 yards the other way for the touchdown.

“I don’t know how I was able to get back up,” Bender said. “I just picked it up and started running.”

That 14-point swing put West Jones ahead 14-6, and the Mustangs never really looked back.

By halftime, they had extended their lead to 28-14 thanks to a 31-yard touchdown pass from junior Zyauawn Williams and a 16-yard run by Follis.

The Mustangs received the second-half kickoff, and Follis hit Tajrick Randoloh in stride for a 63-yard touchdown pass to make it 35-14.

Tailback Kentrell Pruitt paced the West Jones offense all night, with 21 carries for 102 yards and two touchdowns. The game ended with the Mustang offense taking knees at the Laurel 2-yard line.

Pruitt chalked up the success in the running game to the offensive line, which he said really stepped up.

“Ever since (Laurel) beat us in the regular season, we’ve had this bitter taste in our mouth,” he said. “We just wanted to set the score right and just whoop them.”

As big as the win was for West Jones, it was just as crushing for Laurel, who came into Friday riding a five-game winning streak after starting the season 0-3.

The Tornadoes gave the ball away on turnovers three times in the first half, and West Jones cashed in all three for touchdowns.

Scott, Laurel’s senior quarterback who has improved tremendously as the season has progressed, played the game despite the death of his father, Dexter Scott Sr., on Tuesday.

“I’ve seen a lot of things in 17 years,” Laurel coach Ryan Ernest said. “What Dexter Scott did tonight is the bravest thing I’ve ever seen on a football field. I mean, three days after losing his father, to come out here and play a game of this magnitude — he’s a warrior.”

Scott completed 18 of his 33 pass attempts for 190 yards with one touchdown through the air and another on the ground. All-everything Laurel tailback Xavier Evans had 15 carries for 114 yards, including a 25-yard, second-quarter touchdown run.

But the West Jones defense came up with four turnovers, including the game-sealing interception by Bender with 5:17 to go in the final quarter.

“Cedric had a rough game the last time we played here,” Follis said. “So we were all excited to see him play as well as he did tonight and we couldn’t be any prouder of him.”