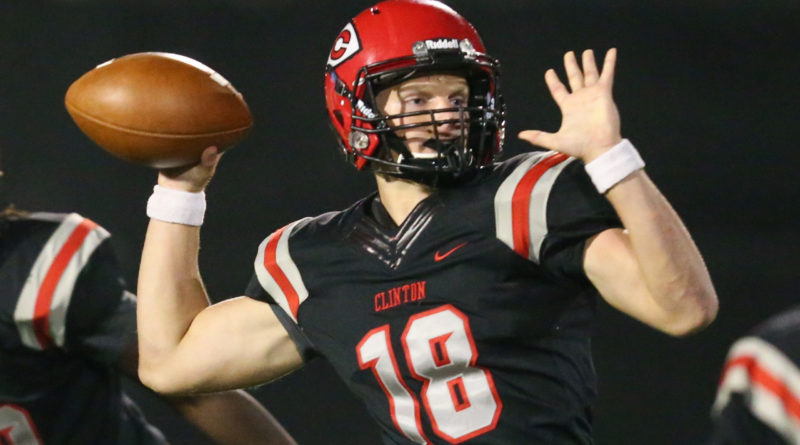 CLINTON — The way things were going Friday with cancellations and forfeits, Clinton coach Judd Boswell was just happy his team was healthy enough to play Horn Lake in the first round of the 6A North Playoffs.

Beating the Eagles 35-7 to advance to the second round didn’t leave a bad taste in his mouth, either.

The Arrows (9-2) put the distractions aside, scored on their first two offensive plays and never looked back to put Horn Lake away and advance to the next round, where they’ll face a familiar foe in Warren Central (9-2). The Vikings advanced without having to play Tupelo, which became the ninth team this week to forfeit a playoff game due to COVID-19.

The Arrows beat the Vikings 31-16 in Vicksburg in the regular season. The rematch will be right here off of Arrow Drive next Friday night if both teams can avoid the virus.

“Region 2-6A is so brutal,” Boswell said. “Even if you make the playoffs, it’s like you have to win 2-6A again, and that’s what’s happening. At least we don’t have to go down there again — I hate playing down there — but we have to come back and get ready for a huge ballgame next week.”

If the Arrows keep executing the way they did Friday night, Boswell might not have much to worry about.

Clinton unloaded a barrage of explosive plays in the first half and built a 28-0 halftime lead to put their first-round game away early.

Tailback Montavious Warren took the handoff on the first offensive play of the game, powered through the line and went 75 yards, almost untouched, for a touchdown.

After a quick three-and-out for the defense, the Arrows got a break on the ensuing punt return and took over inside the Horn Lake 30-yard line. Clinton QB Caleb Miller faked the handoff to Warren on the very next play and kept it himself for a 29-yard score.

“That’s what we want to do,” Miller said. “We want to start fast. And this is the playoffs, so we know everyone is going to go as hard as they can, and we just really focused on coming out and executing as best we could.”

Clinton added two more touchdowns before half — a 75-yard touchdown pass from Miller to sophomore wideout Jordyn Battee and a 76-yard run from Miller on back-to-back possessions in the second quarter.

Miller finished the night having completed four of six passes for 146 yards and two touchdowns. He also carried the ball 12 times for 96 yards and two more scores.

“He’s done such a great job with how he’s handled everything — the progressions and just everything,” Boswell said. “Tonight, we didn’t want to run him a lot and we wanted to get Montavious a lot of carries, but it was the guys up front that did a good job tonight.”

Warren finished with 13 carries for 105 yards.

As strong of a night as it was for Clinton, it was just as disappointing for Horn Lake (5-5). The Eagles came in as big underdogs, and played to a 7-7 tie in the second half after giving up the big plays in the first half.

They almost got on the scoreboard at the end of the first half after driving down to the Arrow 10-yard line, but the Clinton defense swarmed quarterback Trinton Conder, who couldn’t find an open receiver and took a sack as time expired on the first half.

The Eagles’ lone score came early in the third quarter on a 17-yard fumble return by defensive back Drevion Williams.