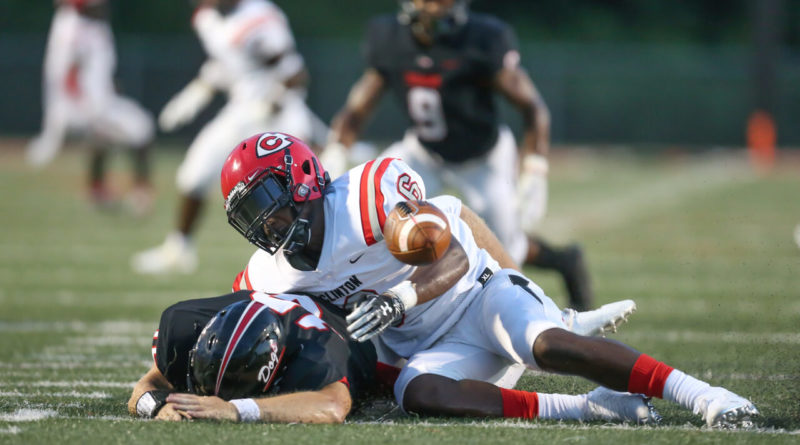 Every week during the 2020 football season, SBLive will rank the Top 10 high school football teams in the state of Mississippi, regardless of classification.

Kabe Barnett threw four touchdown passes as the Grovers captured the top playoff seed coming out of Region 3-6A. Oak Grove has been ranked No. 1 since mid-October and heads into the 6A playoffs with a full head of steam.

The defending 6A state champs have now won 22 games in a row going back to last season. The Chargers wrapped up the top seed coming out of Region 1, but have their sights set much higher as they prepare to host Madison Central in the first round of the playoffs this week.

The Warriors were the toast of the coast from wire to wire during the regular season, and finished off their unbeaten run Friday with a big win over St. Martin. They’ll host the No. 4 seed from Region 3, Petal, this Friday night in the first round of the playoffs.

The Tigers bounced back from a mid-season slump and won their final three games of the regular season after starting 0-2 in region play. They got a big lift in playoff seeding from Clinton’s win over Starkville, and will now host the three-seed from Region 1, Hernando, in the first round of the 6A playoffs this week.

The Cougars rallied from a halftime deficit to advance to the second round of the 4A playoffs. We slept on Newton County for most of the season, but at 10-0, they undeniably look like a Top 5-type team that could go the distance. They’ll travel to Summit this week for a second-round matchup with North Pike.

The Arrows move into the Power 10 in the final rankings of the regular season after thrashing the once-proud Yellowjackets to knock them out of the playoffs. Coach Judd Boswell has his team peaking at the right time headed into their first-round matchup with Horn Lake this Friday night.

The Titans had the night off last week, the second in their two-week hiatus from football, courtesy of COVID-19. Ridgeland has looked very strong under first-year coach Sam Williams, but now must shake off the rust from two weeks without practice for a first-round matchup against a good Lake Cormorant team on the road. They have not lost a game on the field since the second week of September.

Like their region brethren in Ridgeland, Neshoba Central was off Friday night, but secured the top seed coming out of Region 2-5A thanks to Holmes County Central’s 26-7 win over Vicksburg. The Rockets host a tough first-round matchup against Lafayette this Friday night.

Harrison Central has had an interesting year. The Red Rebels beat the brakes off of the first six opponents they faced before losing a stunner to Hancock and falling to No. 3 D’Iberville in back-to-back weeks. But that’s all water under the bridge following Friday night’s big win over Ocean Springs, which vaulted them to the No. 2 seed coming out of Region 4. They’ll host Region 3 fourth-seed Pearl this weekend.

The Jaguars are probably the biggest unknown in the state headed into the 6A playoffs. They have three wins over then-ranked opponents, two one-score losses to ranked opponents and one head-scratching loss (to Brandon) on their resume. Which Jaguar team will show up when they travel north for a first-round matchup against No. 2 Oxford this week?

We were bullish on the Mustangs earlier in the season, and with good reason. Aside from a mid-October stumble against a resurgent Laurel team, the Mustangs haven’t lost a game on the field (they forfeited one game to South Jones due to COVID). The Mustangs have their work cut out for them on the road this week against Picayune, which has lost two-straight headed into the playoffs.