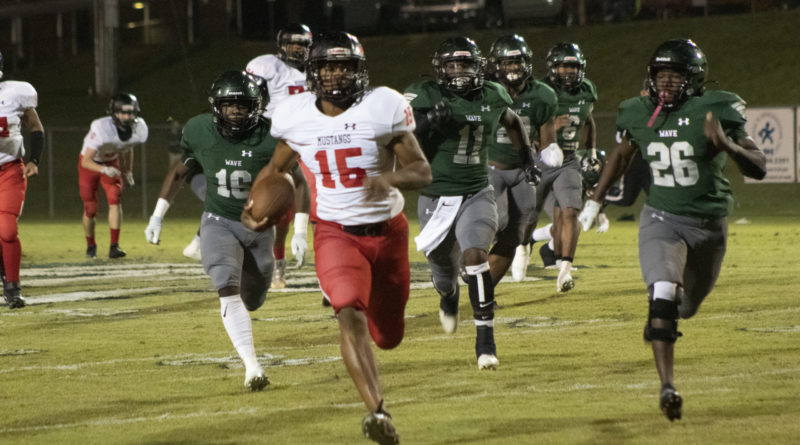 From Clinton quarterback Caleb Miller to Harrison Central wide receiver Jacobi Moore, there were dozens of standout performances across the state of Mississippi on Friday, Nov. 6.

Miller rushed for 109 yards and three touchdowns and passed for 179 yards and another TD to lead Clinton to a 35-7 win over Starkville. — GAME STORY

Barnett completed 13 of 15 passes for 209 yards and four touchdowns to lead Oak Grove to a 56-30 win over Northwest Rankin. — GAME STORY

Crosby rushed for five touchdowns and passed for another TD to lead Presbyterian Christian to a 49-24 playoff win over Oak Forest.

Colom rushed 15 times for 232 yards and three touchdowns in just two quarters to lead Walnut to a 48-32 win over Palmer in the first round of the 2A playoffs. Walnut also had an interception on defense.

Luellen rushed 21 times for 111 yards and two touchdowns to help lead Walnut to a 48-32 win over Palmer in the first round of the 2A playoffs.

Smith rushed 22 times for 129 yards and two touchdowns to lead Itawamba to a 34-18 win over Leake Central in the first round of the 4A playoffs.

Aborom stepped in front of the first Northwest Rankin pass attempt of the night and took it 40 yards the other way for a touchdown. Oak Grove went on to a 56-30 victory.

Briscoe had a 46-yard interception return for a touchdown to help lead Clinton to a 35-7 win over Starkville.

Jefferson sacked Ocean Springs quarterback Bray Hubbard twice in the final two minutes of the game to preserve a 35-28 Harrison Central win over the Greyhounds Friday night in Region 4-6A football.

Turner finished 12-of-19 passing for 150 yards and three touchdowns. He also ran for 45 yards and a pair of scores to help lead Harrison Central to a 35-28 win over Ocean Springs.

Hobbs scored all three touchdowns and rushed for over 100 yards in Center Hills 42-21 loss to West Point.

Holston had 8 carries for 231 yards and two touchdowns and added a 60-yard TD reception in Poplarville’s 62-17 win over Florence.

Ford had two touchdown catches — including the game-winning 59-yard TD reception on a fourth down play late in the fourth quarter — to lead Hattiesburg to a 20-18 win over East Central. — GAME STORY

Robinson made several big plays in Hattiesburg’s 20-18 win over East Central, but the biggest one sealed the victory for the Tigers. With East Central mounting a potential game-winning drive late in the fourth quarter, Robinson sacked Hornet quarterback Brady Fant, forcing a fumble and getting the recovery to ice the game.

Steele went 18 of 27 for 331 yards and five touchdown passes to lead Kemper County to a first-round 46-12 playoff victory over Wilkinson County.

Pittman threw for 287 yards and three touchdowns and rushed for 65 yards and two TDs to lead Magee to a 43-0 3A playoff victory over Yazoo County.

Minor had 20 carries for 190 yards and three touchdowns in Natchez’s 31-30 loss to South Jones.

Simms had 33 carries for 504 yards and 7 touchdowns in Morton’s 64-30 win over Jefferson County. Simms also returned a punt 64 yards for a TD.

Rogers had more than 200 yards from scrimmage, including 5 catches for 142 yards and two TDs, in Holmes County Central’s 26-7 win over Vicksburg.