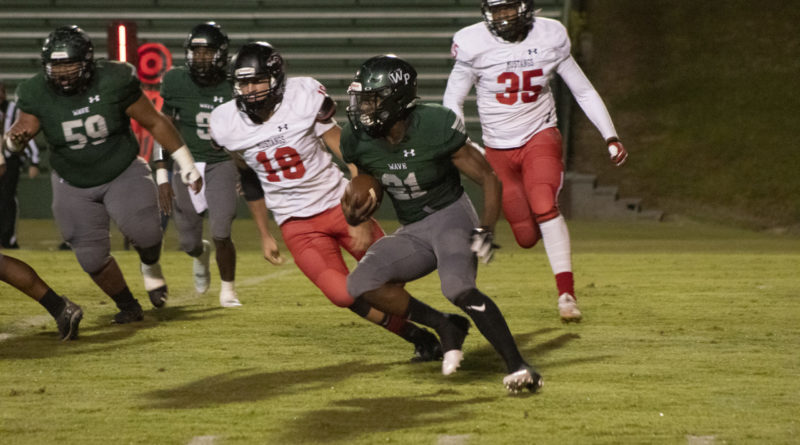 WEST POINT — West Point receiver Shawn Melton leapt in front of a defender to snag a 17-yard touchdown pass from Corbin Kelley and deliver the dagger in a 40-21 win over Center Hill Friday night.

With the win, West Point finishes the regular season with a 7-3 record. They’ll travel to Holmes County Central for the first round of the 5A playoffs next week.

“The triple option, with the midline added in there, it is just hard to defend,” Chambless said. “It causes you to lose sleep all week. Our guys played good assignment football. I felt like we did pretty well with it.”

Center Hill came out shooting from the hip, as Darryen Hobbs raced down the sideline towards the pylon on the opening drive, only to be pushed out of bounds at the 1-yard line. The next play, he bulldozed straight up the middle for a touchdown and giving the Mustangs the early 7-0 lead.

Center Hill coach Alan Peacock said he had put in the play that they ran on those two plays in preparation for the game against the Green Wave. He installed it with just a single day of practice before the game.

“We put that briefly in off of one of our base plays,” Peacock said. “Because we knew how they play us. Coach Chambless does such a good job. We thought we could get it to pop.”

It did not phase West Point in the slightest, as the Green Wave answered with a long drive capped by a 7-yard run from Montaivious Edwards, who bowled his way in to tie the game.

West Point never trailed again, and outscored the Mustangs 33-7 the rest of the way.

“That is one thing about our guys,”  Chambless said. “They practice so hard every day. They stay locked in and focused.”

Edwards was the first of four West Point running backs who scored touchdowns in the game. The second was Cameron Young, who plunged over the goal line on a 3-yard rush near the end of the first quarter to put West Point ahead 14-7.

The scoring opportunity would not have been possible if the defense hadn’t forced a fumble at the Mustang 24-yard line that Chambless called the most pivotal moment of the game.

Hobbs scored all three touchdowns for Center Hill, which missed the playoffs with the loss and finishes the season at 6-4.

“He is obviously our best football player, he plays both sides of the ball,” Peacock said. “I think he is one of the best players in our district. He is just a phenomenal football player. He has been a three year starter, we put him wherever we need him to make a play. He is just a great young man.”