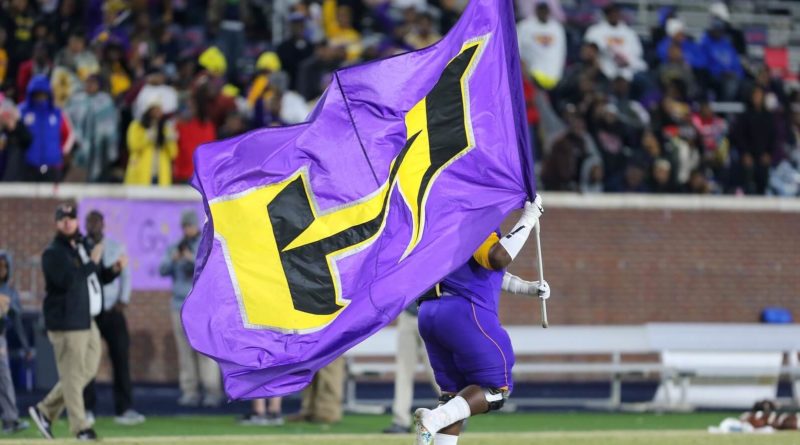 HATTIESBURG – It has been a bit of an up-and-down season for Hattiesburg High, but the Tigers are on an upswing at just the right moment.

The Tigers converted a fourth down on a 59-yard TD catch by Jermel Ford for a go-ahead touchdown, then recovered a fumble on defense to seal a 20-18 victory over East Central in the regular-season finale in Region 4-5A Friday night at D.I. Patrick Stadium.

“It’s a great feeling,” said Hattiesburg coach Tony Vance. “I can’t say enough about our seniors. They came through time and time again, and they made plays when they had to. This is a big win for our team against one of the better teams in our division.”

Vance described it as, “a heavyweight boxing match,” and both teams took turns landing haymakers.

The Hornets got on the scoreboard first on a 31-yard field goal by Tyler Farris, but it came after East Central used up half the first quarter clock and got as far as the Tiger 5-yard-line. A holding call on third down and an incomplete pass forced the Hornets to settle for the field goal.

Hattiesburg came right back on its first possession, driving 64 yards on eight plays. The big play in the drive was a 45-yard pass from punter Matthew Adams to Joshua Jones on a fake punt. The Tigers got the score on a 14-yard pass from senior Jordan Willis to Ford.

The fake punt was the first of three fourth-down conversions for Hattiesburg, and they all led to touchdowns.

East Central took the ensuing kickoff and drove 55 yards for a score, getting the touchdown on a 5-yard run by Samuel Walls, who led the Hornets with 74 yards on 17 carries.

Back came the Tigers, who converted a fourth down near midfield on the way to a 10-play, 63-yard scoring drive. Junior Ellis Brown got the first down with a 12-yard run on a fourth-and-1 from the Tiger 46, and the touchdown on a 9-yard carry.

Irianna Evans’ PAT kick was blocked, but the Hornets were flagged for a personal foul on the play, and she nailed her second chance.

Hattiesburg’s defense stepped up on the next series, stopping East Central on fourth down after the Hornets drove to the Tiger 20 before being pushed back.

The Tiger defense spent most of the night playing a bend-but-don’t-break game, as East Central enjoyed a significant advantage in time of possession, 29:39 to 19:21 for Hattiesburg.

“Our defense has been playing great all year, except for one game,” said Vance. “Again tonight, they did a great job. We put them in tight spots all night, but they bailed us out.”

Indeed, the Tigers came up big on another fourth-down stop midway through the third quarter, after the Hornets used up 6:43 off the clock on a 15-play drive. Senior linebacker Tomacio Robinson stopped Eli Smith on a fourth-and-1 at the Tiger 15.

“We played them last year, and that was the first time we’d seen them,” said Robinson. “We really didn’t know how they played, but they’re similar to Picayune, so we had a game plan for them this time.”

The game came down to the last five minutes. After the Tigers lost a fumble at their own 40, East Central drove eight plays for a go-ahead touchdown, on a 12-yard run by Colby Reynolds.

On the next do-or-die possession, on fourth-and-2, Willis rolled to his right and found Ford open, and Ford outran the pursuit for a 59-yard scoring play.

“I couldn’t let my teammates down,” said Willis. “We had the play we wanted, we just had to knock it in.”

East Central got one first down on the ensuing possession, but Robinson got through on a third-and-12 play, sacking Hornet quarterback Brady Fant, forcing a fumble and getting the recovery to ice the game.

“The first half, we didn’t get in there as much,” said Robinson. “In the second half, we picked it up, and I happened to get in there for the game-winning play.”

With no clear favorite in Class 5A South this season, the Tigers like their chances of making a postseason run.

“We’re in, that’s all I care about,” said Vance. “There are some good teams in 5A, without a doubt. We just wanted a shot, and we got that tonight.”