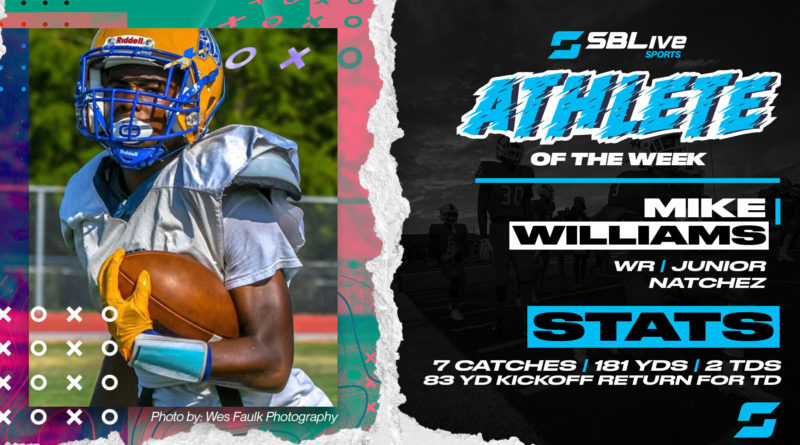 Williams had 7 catches for 181 yards and 2 touchdowns along with an 83-yard kickoff return for a TD in the Bulldogs’ 41-38 loss to Brookhaven.

Williams received 33.65% of the vote, beating out Enterprise RB Kristian Milsap who finished with 23.2%. South Panola WR Cameron Wright finished third with 5.47% and Tupelo RB Kyson Brown was fourth with 4.3%

We are currently accepting Athlete of the Week nominations for the week of Nov. 2-8. If you would like to nominate an athlete, please email regan@scorebooklive.com or tag us on Twitter or Instagram at @sblivems.

Here are the other athletes who were nominated for Oct. 26-Nov. 1

Kabe Barnett, Oak Grove QB: Barnett was simply sensational against the Pearl Pirates, who had no defense for him or his many weapons. Barnett completed 11 of 18 passes for 276 yards and five touchdown passes, and he ran three times for 33 yards and another TD in Oak Grove’s 47-7 win.

Jayden Reed, Lafayette RB: Jayden Reed rushed 35 times for 195 yards, including the go-ahead touchdown on a fourth-and-one play to lift Lafayette to a 28-14 win over Columbus.

David Hubbard, South Panola QB: Hubbard completed 14 of 23 passes for 243 yards with 3 TDs and one interception in a 36-35 win against Warren Central.

Keilon Parnell, Pascagoula QB: Parnell was the star of the game for Pascagoula, hitting on 10-of-13 passes for 256 yards and four touchdowns. He also ran the ball six times for 31 yards and a touchdown to lead the Panthers to a 42-35 upset of Picayune on Saturday.

Austin Samples, Picayune RB: Samples rushed for 202 yards and a score on 18 carries. He also caught two passes for 54 yards in Picayune’s 42-35 loss to Pascagoula on Saturday.

Kyson Brown, Tupelo RB: Brown scored three touchdowns and rushed for more than 175 yards to lead Tupelo to a 34-13 win over Horn Lake.

Chris Watson, St. Joseph QB: Watson had five rushing touchdowns and one passing TD to lead St. Joseph to a 41-28 win over Riverside.

Hunter Jones, Amory QB: Senior quarterback Hunter Jones threw for 226 yards and three touchdowns in Amory’s 31-13 win over Belmont. Jones, who barely played in the second half, surpassed 10,000 yards of career offense in the win.