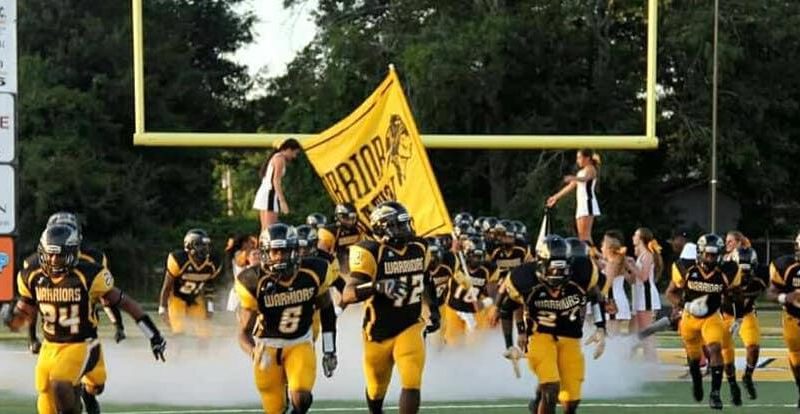 LYNAM — D’Iberville’s defense forced two turnovers in the final two minutes Monday night as the Warriors edged past Harrison Central 20-13 to claim the Region 4-6A title.

The region championship is the first for D’Iberville, ranked third in SBLive’s Power 10, since 2016.

“It feels great,” said quarterback Dwight Williams, who said the Warriors were not finished in 2020. “We are not satisfied. We want to make a strong run into the playoffs.”

Harrison Central, meanwhile is assured of a spot in the playoffs. They will travel to Ocean Springs Nov. 6 with the winner of that game taking second in the region and the loser falling to third in region play.

After a first half that didn’t see a punt, the second half turned into a defensive slugfest with both teams having issues moving the ball. The Warriors (8-0) got their break with just over two minutes left in the third quarter when Minnesota commit Justin Walley blocked a Rebels punt, giving D’Iberville the ball on the Harrison Central 30.

On the sixth play of the drive, Walley took the ball in from five yards out to give the Warrior a 20-13 lead going into the fourth quarter.

However, in the final quarter of play, it was the Warriors defense that would seal the win, not allowing Harrison Central a single first down in the quarter. With just over two minutes left in the game, Manny Duplessis forced a fumble and returned it to the Rebels’ 16. Although D’Iberville wasn’t able to score on the possession, they managed to get the clock down to 24 seconds left before giving the ball back to Harrison Central on the Rebels’ 7.

“We got a little sloppy at the end,” said Warriors coach Larry Dolan. “We should have punched it in to seal the game, but couldn’t. I guess we made it a little exciting at the end.”

Amarion Fells then ended any thoughts of late-game heroics by the Rebels, picking a pass off and returning it to the 2 with 15 seconds to play. From there, the Warriors ran out the clock for the win.

The first half featured long drives by each team. D’Iberville got on the board first, with Drey Lenoir capping a 10-play drive with a 2 yard plunge with 4:40 left in the first quarter.

The Rebels would respond with a 10-play drive of their own. From his 14, Rebels quarterback Christian Turner tried to find Isaiah Atkins in the end zone. However, the ball bounced off Atkins and into the hands of Jacobi for the score. The PAT missed, and Harrison Central was down 7-6.

The Warriors responded with a 12-play drive with Williams finding Colton Deshazo on a 27-yard pass play. Williams connected with Deshazo six times for 86 yards and the second-quarter score. Harrison Central blocked the PAT to make the score 13-7.

Harrison Central responded immediately with Turner connecting with Mikuan Sanders on a 44-yard pass play to send the game into the half tied at 13-13.

Walley finished the night with a blocked punt for D’Iberville, 101 yards rushing and a touchdown on 16 carries and caught three passes for 25 yards.

Before the playoffs begin, Dolan noted the Warriors had a date with St. Martin this coming Friday.

“The players know each other,” he said of the rivalry between the neighboring schools. “We don’t want to go into the playoffs with a loss.”