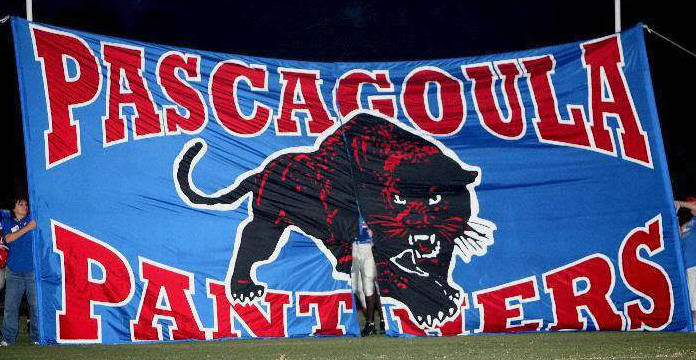 PASCAGOULA -— Halloween turned out to be more of a trick than a treat for Picayune, as Pascagoula used big plays and two first-half Maroon Tide turnovers to take an early lead and then hold off Picayune 42-35 in Region 4-5A football action Saturday.

Picayune (8-1), ranked first in SBLive’s Class 5A rankings and fifth in the state, ends the run of the last undefeated 5A team. Still, the loss could mean little as the Maroon Tide finish the season with region opponent Wayne County (4-6) on Nov 6. With its 14-7 win over East Central on Sept. 25, Picayune has, in effect, a one-game lead over the Hornets (8-1) for the top spot in Region 4-5A.

“We are still in the hunt for the number one seed in the region,” said Picayune coach Cody Stogner, who noted the Maroon Tide were assured of one of the top two playoff berths in the region and an opening-round home game. And, home field, he said, “is very important. Look at today. It helped (Pascagoula).”

Stogner said he would be interested in seeing how his team responds to its first loss of the season and first loss in his tenure, having replaced longtime Picayune coach Dodd Lee, who led the Maroon Tide to the state finals last year.

“We will see how we can bounce back from a loss,” he said.

For Pascagoula, the win puts the Panthers (5-4) back in the hunt for either the third-seed or fourth-seed coming out of the region. Pascagoula travels to Long Beach (1-8) next Friday night.

“There are still some things that have to be worked out,” said Pascagoula coach Lewis Sims. “You never know what can happen in high school football and there are some things that are out of your control. But, if we play with the same effort, execution, and teamwork that we played with today, we will be in good shape.”

Despite only having the ball for 5:29 of the first half, with Picayune enjoying a 3-to-1 time of possession advantage over the first two quarters, the Panthers led 21-14 going into the break behind big plays.

Two long Maroon Tide offensive drives ended with fumbles deep inside Panther territory. Picayune took the opening kick and drove from their 27 to the Pascagoula 25. Maroon Tide running back Dante Dowdell found a crease in the Panthers defense and appeared to ramble for a first down before fumbling. Antonio Sanford picked up the ball for Pascagoula, turning back the Picayune drive.

“I told our players before the game that we had to create turnovers and give ourselves extra possessions,” Sims said. “Those were huge plays.”

And, Pascagoula took advantage of the turnovers offensively. The Panthers would run only one play in the first quarter and that play followed Picayune’s first turnover with Keilon Parnell finding Jaylan Thompson alone 10 yards behind the Maroon Tide defense. Thompson did the rest for an 85-yard scoring play to put the Panthers up 7-0.

“I knew I had to get them to bite on the ball,” said Parnell of the play. When the Tide came after the play-action fake, he hit Thompson. “No one believed we could pass the ball.”

Behind Samples and Dowdell, the Maroon Tide offense moved the ball well. But, each time Picayune would score, Pascagoula would respond with a big play to stay in front.

Picayune running back Dorian Robinson capped a 16-play, 73-yard drive with a 1-yard plunge with 9:26 left in the second quarter to tie the game at 7-7. On the ensuing drive, though, Kayvon Barnes rumbled 20 yards to set up Parnall’s second scoring strike, this time 28 yards to Brennen Grubbs to put the Panthers back up by a score.

With 2:14 left, and following a short Pascagoula punt, the Maroon Tide used a big play of their own when Isaac Hickman connected with Samples on a 46-yard scoring toss to tie the game at 14-14. But, Pascagoula responded with a pair of long passing plays — 27 yards to Houston Johnson and 41 yards to Thompson for the score — to go into the break up 21-14.

The Panthers received the ball to start the third and responded with their longest drive of the game, a seven-play, 68-yard drive capped by Barnes’ 10-yard run to give Pascagoula a two-touchdown advantage, 28-14.

Again, Picayune responded with a long drive, going 63 yards in 10 plays with Samples scoring from 25 yards out to cut the Panthers’ lead back to 7, 28-21. But the story didn’t change as Pascagoula responded with another big play as Evans, who recovered the second Maroon Tide fumble, took the kickoff at his 12 and ran the ball back to the Picayune 8-yard line. Two plays later, Parnell put the Panthers back up by two touchdowns with an 8-yard run.

Picayune scored quickly to cut the lead back to one touchdown as Hickman connected with Noah Carter on a 56-yard play making the score 35-28 Pascagoula. The Panthers, though, put together another six-play drive, enabled by a 29-yard Parnell scramble, before Parnell hit Thompson on the pair’s third scoring drive of the day, pushing the score back to two touchdowns, 42-28.

Picayune stalled on their next drive, turning the ball over to Pascagoula on downs at their own 25. Pascagoula didn’t scored, but they knocked over four minutes from the scoreboard before giving the ball back to the Maroon Tide at the Picayune 2 with 3:15 left to play.

Samples helped Picayune make the game interesting, running 78 yards to the Pascagoula 20 before Hickman went in from the 1 with 1:22 to make the score 42-35. Although the Maroon Tide failed on their onside kick attempt, Picayune got one last attempt with 19 seconds left and the ball at their own 48. Three incomplete passes later, the game was over.

“We came out believing in ourselves,” said Parnell.

Parnell said the week, with the hurricane, “had thrown us curveballs all week.” But, with the help of big plays, the Panthers had hit those curves out of the park.

“The week has been fouled up with the hurricane hitting, players having to clean up their yards from debris, playing on Saturday,” said Sims. “But, I am very pleased with the effort these guys gave.”

The loss spoiled a great day for Picayune’s Samples, who rushed for 202 yards and a score on 18 carries. He also caught two passes for 54 yards.

“He’s not really flashy and he’s not always the fastest player on the field,” said Stogner of his senior running back. “But, he’s as tough as nails and we rely on him to make big plays.”