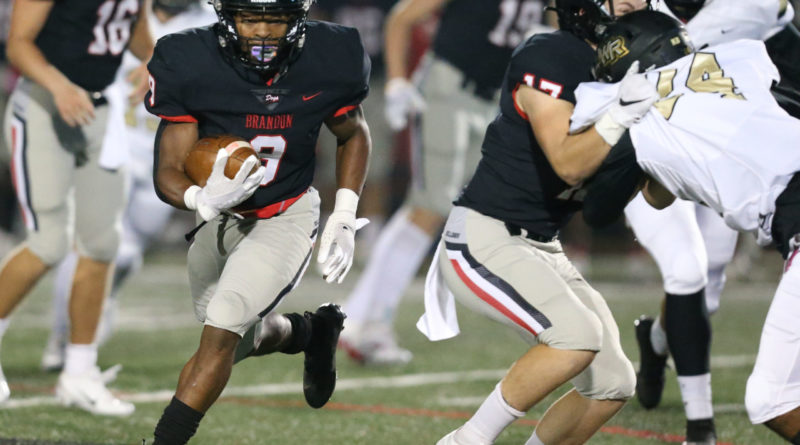 Kabe Barnett was simply sensational against the Pirates, who had no defense for him or his many weapons. Barnett completed 11 of 18 passes for 276 yards and five touchdown passes, and he ran three times for 33 yards, the big run a 22-yard dash for the Warriors’ third score. — GAME STORY

The winning streak is now at 21 for Oxford. Trailing 20-13 at halftime, the Chargers scored 24 unanswered points to start the second half. — GAME STORY

Hurricane Zeta caused games to be shuffled all along the coast. This one will be played on Monday.

The Yellowjackets have been in COVID-19 quarantine for nearly two weeks. They’re planning to return to action next week at Clinton in their regular season finale.

In a game that was pushed to Saturday because of Hurricane Zeta, the Maroon Tide could not stop Pascagoula quarterback Keilon Parnell. He hit on 10-of-13 passes for 256 yards and four touchdowns and ran the ball six times for 31 yards and a touchdown. — GAME STORY

The Bulldogs got 117 rushing yards out of freshman tailback Nathaniel Blount and ran for 400 yards as a team in a stunning 42-21 win over the No. 6 Cougars. Brandon more than doubled the Cougars in time of possession, 32:42 to 15:18. — GAME STORY + PHOTOS

In an instant classic, the Vikings suffered a heart-breaking double overtime loss despite a terrific performance from quarterback Kentrick Thompson. D’mariun Perteet converted the game-winning two-point conversion for South Panola in the second OT. — GAME STORY

Less than one week after picking up the program’s biggest win in several years — a 33-29 win over then-No. 3 Neshoba Central — the Titans had to forfeit their regular-season finale against Holmes County Central because of positive COVID-19 cases. Depending on what happens in next week’s Holmes County vs. Vicksburg game, the Titans could end up tumbling from the top seed coming out of Region 2 all the way to the third seed.

The Rockets don’t currently have a game scheduled for next week, so they’ll have plenty of time to prepare for the playoffs.

The last unbeaten team in 4A, the Cougars have outscored their opponents by a combined score of 339 to 46. It’s now on to the 4A state playoffs.