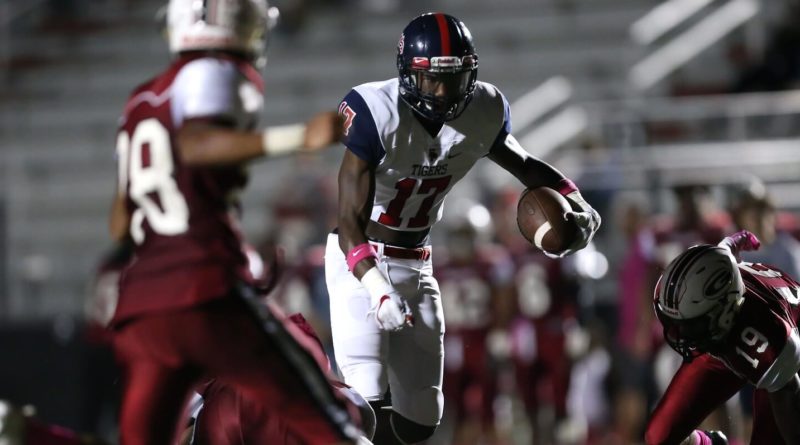 VICKSBURG — Most people wrote South Panola off three weeks ago when the Tigers were in turmoil.

They had just lost back-to-back games to Clinton, the starting quarterback quit the team and the Tigers had already gone through a two-week quarantine.

That’s what made Friday night’s 36-35, double-overtime win over No. 5 Warren Central so satisfying.

The Tigers (7-2) — now winners of three straight — punched their ticket to the playoffs and kept themselves alive in the race for the top seed coming out of Region 2 thanks to a successful two-point conversion in the second overtime of an instant classic at Robert Morgan Field.

The Tigers lined up to go for two and drew Warren Central offsides with the hard count, which put the ball at the 2-yard line. D’mariun Perteet did the rest with a 2-yard run that sealed the win for South Panola.

“We had a no-play call in,” Wood said. “We weren’t going to run a play, but when they jumped off-sides I felt like we had had a good bit of success running the football and we could score it from the two (yard line).”

It was a fitting end to a game that was back-and-forth for much of the night.

Hubbard tossed a bomb to junior John Blockmon, who was 10 yards behind the closest defender, for a 42-yard score on the opening drive. On the Tigers’ second drive, he hooked up with Cameron Wright on a 10-yard curl, and Wright shucked one tackler and ran away from several pursuing Vikings on the way to a 65-yard touchdown.

It wasn’t the only highlight-reel play of the night for Wright — South Panola’s star receiver finished the night with six catches for 131 yards and two touchdowns.

Warren Central finally responded in the opening minute of the second quarter when tailback Tim Thompson capped an eight-play, 66-yard drive with a two-yard run to cut the South Panola lead in half.

The two teams traded scores twice more before halftime — Perteet added a 20-yard touchdown run for South Panola and Thompson scored on another two-yard run, to give Panola a 21-14 lead at the half.

The deficit could have been more lop-sided if not for Warren Central cornerback Tevin Bell, who made two big defensive plays on back-to-back plays in coverage of Wright just before the half.

The Vikings pulled even with 3:53 left in the third quarter on a 47-yard pass from Thompson to Treyvion Hall.

The Tigers had the ball a couple of times with chances to win the game late, but Warren Central came up with a couple of big stops.

“It was just a tremendous game tonight,” Woods said. “If tonight didn’t thrill you, I don’t know what well. This is why we’re in this business.”

South Panola scored first in the initial overtime period on a 10-yard pass to Wright, who made the play of the night with a circus catch over the out-stretched arms of Bell to put the Tigers back on top.

Warren Central responded right away with a three-yard run by Tim Thompson to extend the game.

The Vikings got the ball first to start the second OT and scored on a one-yard run by Kentrick Thompson on third down.

Perteet scored on fourth-and-goal from the one-yard line to set up the game-winning two-point conversion, which gave him 100 yards rushing for the night.

“It feels good because we went through a lot of adversity,” Perteet said. “We had a lot of bad calls and bad plays but we fought through it and did what we needed to do to get the win. We’ve just been working hard, trying not to lose games. You want to go 1-0 each week, and that’s what we’ve done.”