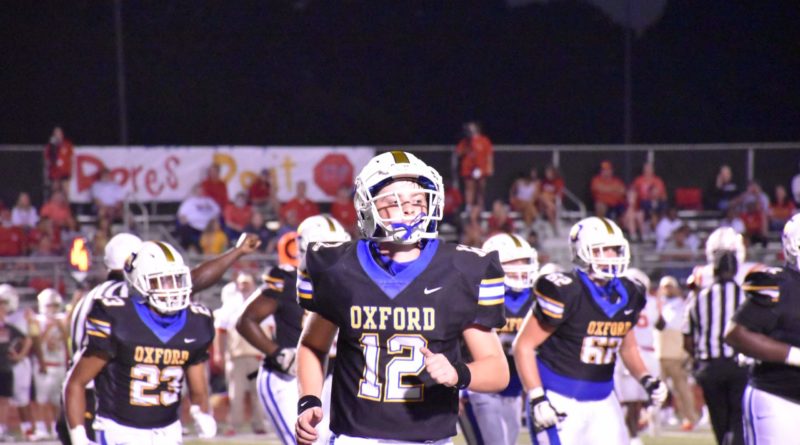 OXFORD — The Oxford Chargers used a second-half surge to defeat the Hernando Tigers 37-27 at Anthony Jenkins Field on Friday night.

The Chargers outscored the Tigers 24-7 in the second half after falling behind 20-13 at halftime.

“We’ve been in this situation before,” Oxford coach Chris Cutcliffe said. “There weren’t any concerns about coming out and playing with energy or effort in the second half. I was definitely proud of how they responded.”

Field position was a key point in the second half as Hernando started most of its drives inside of its own 20-yard line. In turn, Oxford found themselves with short fields offensively and they took advantage. According to Hernando head coach Will Wolf, field position was the difference in the game.

“We just couldn’t get any field position,” Wolf said. “We just couldn’t flip the field and you can’t give a team like Oxford the ball in those type of positions. … Oxford is a great football team and you have to have some things go your way and a certain amount of luck, and we just couldn’t find any of those things in that second half.”

Most of Oxford’s offensive success came with junior quarterback Michael Harvey running the offense. Harvey was effective both throwing and running the football. According to Harvey, being able to find a balance in their offense was key to the second0half turnaround.

“Roman Gregory and Omar Howell are such great backs,” Harvey said. “They did such a good job tonight and I’m really proud of them and how they played tonight.”

It was a tale of two halves for the Hernando offense. The Tigers generated 20 first-half points, but Hernando’s offense found little to no success in the second half. The Tigers didn’t cross the 50-yard line until their last drive of the game with just under two minutes remaining. According to Wolf, it was a really frustrating thing to watch.

“It was incredibly frustrating,” Wolf said. “Hats off to them, they made some adjustments and it really just came down to field position. A couple of plays here or there and they just bowed their necks in big moments, and we had to answer that call, and at times we did and at times we didn’t. It’s really disappointing.”

Oxford’s defense tightened up in a big way in the second half. They didn’t allow a score until their team had turned a seven-point deficit into a 17-point lead. According to Cutcliffe, they were just much more fundamentally sound in the second half.

“I think we played more sound in the second half,” Cutcliffe said. “I thought we made less mistakes and we had our eyes in the right place. They have a lot of offensive talent and they’re really tough to stop.”

Oxford comes back home next week where they will play host to Tupelo with a chance to wrap up the Region 1-6A title. According to Cutcliffe, these are the games that you play for.

“This is where you want to be at the end of the season,” Cutcliffe said. “You want to be here with something big to play for and we’ll have a great week of preparation knowing a great team in Tupelo is coming to town.”