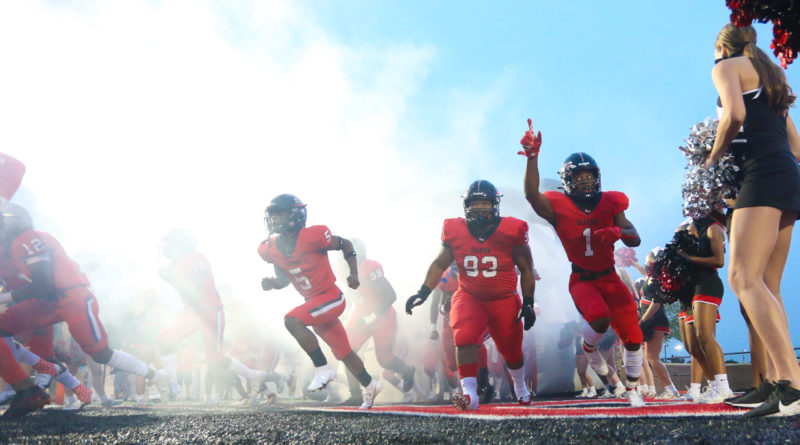 Each week, the SBLive team picks five high school football games of interest that feature intriguing matchups or have major playoff implications. Here’s a look at the best five games around the state for Friday, Oct. 30. (Feature photo by Keith Warren)

South Panola has been up and down this season, but they are certainly “up” at the right time. The Tigers (6-2) are winners of two-straight since losing back-to-back games a month ago headed into a crucial matchup with Warren Central (7-1).

The Tigers have been getting it done on the ground, averaging better than 218 yards a game rushing. They’ll face a Viking defense that has shut down just about every team they’ve played.

The game also has major playoff implications, as both teams are part of a very tight race in Region 2-6A.

D’Iberville (7-0) will make the short trip to Lyman to face region foe Harrison Central (6-1) in a game with major playoff seeding implications.

The undefeated Warriors, No. 3 in this week’s SBLive Power 10 Rankings, can clinch Region 4-6A with a win, while the Red Rebels need a win to keep their region title hopes alive coming off a shocking loss to Hancock.

D’Iberville has looked like the cream of the crop on the coast this season, but Harrison Central has been nipping at their heels all year. This one could be an instant classic.

Magee (6-0) has been through the ringer this season with one quarantine, but has emerged as one of the best teams in 3A. They face their biggest test to date this Friday night, when they make the trip to Columbia for a date with the Wildcats (7-1).

The Trojans can claim the Region 8-3A title with a win, while a Columbia win would create a three-way tie between these two teams and West Marion. To take the region crown under that scenario, the Wildcats need to beat Magee and its splendid quarterback Chandler Pittman by at least seven points.

These two teams put on a show last season, with Pittman going for 223 total yards and two touchdowns and Columbia tailback Omar Johnson rushing for 273 yards and three scores. We can’t wait to see how this year’s rendition plays out.

Weird things happen in rivalry games, and the annual Germantown – Madison Central game was always destined to become one since the Mavericks moved up to 6A. Eight miles is all that separates the two Region 2-6A schools.

The Mavericks (4-4) have been on the cusp of winning several big games this season, and could play the spoiler against their cross-town rivals, which needs a win to keep its playoff hopes afloat.

The Jags (5-3) have been great on defense and up-and-down on offense, while Germantown has been effective with its running game and played great defense in spurts. This game is going to be a lot closer than most prognosticators think.

Another big rivalry game will go down Friday night in Rankin County when Northwest Rankin (7-1) makes the 15-minute drive to Brandon (4-5), and this one has much more than bragging rights on the line.

The Cougars — No. 6 in this week’s SBLive power rankings — need a win to move to 6-0 in Region 3-6A and keep pace with top-ranked Oak Grove, which plays host to Pearl Friday night. If the Cougars win Friday, it’ll likely set up a winner-take-all game in Flowood against the Warriors next week.

If Brandon wins, the Bulldogs would move to 3-3 in the region and would have a chance to play another Rankin County rival, Pearl, in their season finale with a trip to the playoffs on the line. Can Brandon keep its playoff hopes alive? Or will Northwest Rankin avenge last year’s 42-7 loss to the Bulldogs?