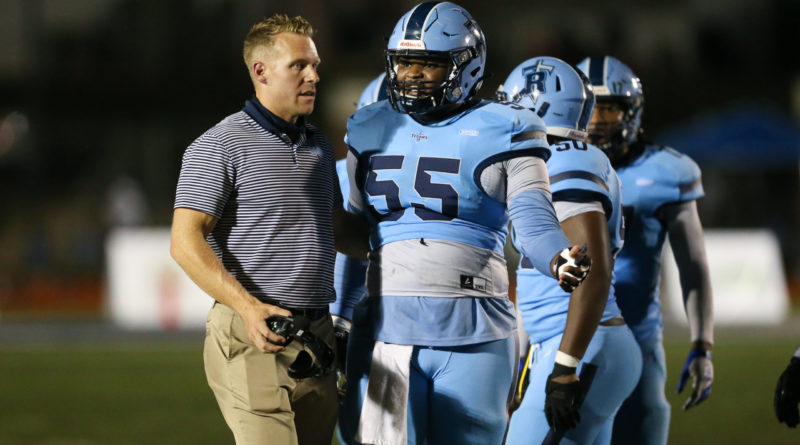 RIDGELAND — Before the season started, the Madison County School District laid out a set of guidelines for football coaches to adhere to when dealing with COVID-19.

One of those guidelines set up a threshold for the number of positive cases among players that would trigger a team-wide quarantine.

On Monday, the Ridgeland Titans (6-1), ranked No. 8 in the latest SBLive Power 10 football rankings, hit that threshold.

Now, less than one week after picking up the program’s biggest win in several years — a 33-29 win over then-No. 3 Neshoba Central — the Titans will have to forfeit the regular-season finale against Holmes County Central.

Depending on what happens in next week’s Holmes County vs. Vicksburg game, the Titans could end up tumbling from the top seed coming out of Region 2 all the way to the third seed, meaning they won’t enjoy home-field advantage in the first round of the playoffs.

“There aren’t really any grey areas when dealing (with COVID),” first-year Ridgeland coach Sam Williams said. “We’re going to strictly follow the guidelines because it’s about player safety, not wins and losses on the field. It’s unfortunate, because I think we have the best team in 5A North, and we could end up as the three-seed.”

Williams’ assessment is 100 percent correct — if Neshoba Central wins out and Holmes County beats Vicksburg next Friday night, it would create a three-way tie for first, and Neshoba Central will claim the top seed, Holmes County would be second and Ridgeland will end up as the three-seed despite not losing a single game in district play on the field thanks to margin-of-victory tie breakers.

But you won’t hear Ridgeland complaining.

The Titans, like everyone else, knew what they were getting into when they embarked on this 2020 season.

“We’re actually pretty fortunate in that we’ll get a full week of practice before the first round,” Williams said. “Whoever we play on the road as a three-seed is going to be a lot more worried about it than we are, because we’ve already proved we can go on the road and compete with teams like Neshoba Central in a hostile environment.”

Ridgeland’s playoff seeding is one of several post-season scenarios being impacted by a resurgence of the pandemic that put this 2020 football season in jeopardy before it ever started.

Most notably, former No. 1 Starkville is entering the second portion of a two-week quarantine that will force them to forfeit a crucial game against Warren Central this weekend with major playoff implications.

No fewer than 30 teams have had to quarantine for some portion of their regular season, but now that we’re closing in on the playoffs, the situation is getting a little more dicey, especially with the number of cases on the rise.

The Mississippi State Department of Health announced Tuesday 854 new cases of COVID-19, bringing the total number of cases for the year to 116,617 with 3,283 deaths. The daily rolling average of new cases has grown 14 percent in the past two weeks. The 7-day rolling average of 739 cases now matches the levels the state experienced in mid-July, right before the biggest spike to date.

Hospitalizations are following the same trend — they were up to 688 on Tuesday after hitting a low of 513 in mid-September.

That’s concerning for more important reasons, but also has competitive implications with the first round of the playoffs set for the second week in November.

Under the current rules, if a team has to quarantine in the playoffs, their season is over and their opponent will advance without having to earn it on the field.

“It’s frustrating,” Williams said. “But one thing I’ve learned through this whole process is that you can only control what you can control. You just have to guard your guys as best you can, guide them and that’s what I’ve tried to do.

“Do I think we’re deserving of the No. 1 seed? Yes. We’ve only played one bad half of football all season or we’d be undefeated. But we’re still in a good place — we know we’re going to make the playoffs, we just need to stay safe and get back on the field.”