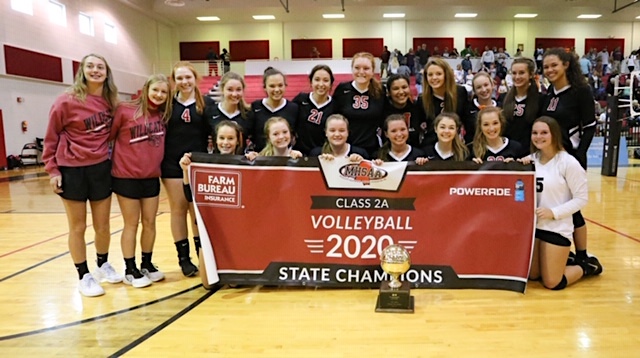 CLINTON — First time was the charm.

Walnut held off a late Puckett rally to win the fifth set 15-8 — and win the match 3-2 — to claim the MHSAA Class 2A Volleyball State Championship on Saturday afternoon.

It is the Lady Wildcats (13-7) first state title in volleyball.

“It was a great battle with both teams adjusting to each other through the whole game,” said Walnut head coach Kelley Hopper. “We’ve played so many games that have came down to the wire, so it wasn’t familiar. I told the girls to never quit and the girls didn’t and I’m so proud of them.”

Puckett opened the match by taking the first set 25-21.

“In the fourth we let up and errors started happening,” Hopper said. “At that point I told the girls to push through it and fight.”

In the fifth set Walnut jumped out to 5-0 lead behind Madison Porterfield, who had five straight points to begin the match.

“She was lights out today and has struggled throughout the season,” Hopper said. “She found a groove and kept it and I’m so proud of her.”

Portfield had seven aces and two assists to lead Walnut.

“I was just going with the flow and coach kept yelling at me to toss the ball in front on my serves,” Porterfield said. “In the fifth set we fought as hard as we can. We had good passes, good sets and that led to good hits.”

“In volleyball anybody can come back and we had to keep the momentum up and not let up,” Hopper said. “Just so proud of the girls for the hard work and to win a state championship is amazing.”

“We got down and I feel like we kept trying to keep rallies going instead of being aggressive and attacking,” said Puckett coach Corianne Mann. “We scored points off their mistakes instead of scoring points off what we could do offensively.”