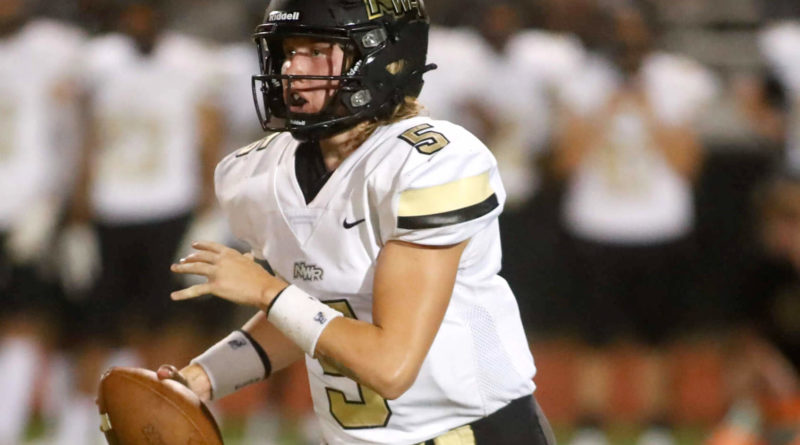 FLOWOOD — For a brief moment, it looked like Shade Foster and the Pearl Pirates were going to pull off the upset over No. 8 Northwest Rankin Friday night in Flowood.

Foster tossed his third touchdown pass of the night with 2:34 left in the fourth quarter to give Pearl a one-point lead.

Then the Cougars came to life.

Quarterback Caleb Parten completed several key passes and led the Cougars 64 yards to set up a 34-yard, game-winning Christian Baglione field goal and Northwest Rankin won in walk-off fashion for the second time in as many weeks, 23-21.

“That’s two weeks in a row we’ve put it on our sophomore kicker’s shoulders and he’s come through two weeks in a row,” NWR coach Toby Collums said. “Both weeks, he comes to me in the huddle during a timeout, no fear in his eyes and says ‘Don’t worry about this, I got it,’ then he goes out there and drills one through.”

Baglione’s kick split the uprights right down the middle, but it was no more impressive than the game-winning drive that set it up.

The Cougars, 7-1 and tied with top-ranked Oak Grove atop the Region 3 standings, struggled off and on throughout the night offensively.

They were down two regular starters on the offensive line, and ended up starting a freshman and a sophomore at the two guard spots against a solid Pearl defensive line that keyed on NWR tailback Cam Marion from the opening whistle.

The Pirates were determined to make someone else beat them, and Cougar quarterback Caleb Parten did just that on the final possession. The senior completed five of his nine pass attempts on the drive for 57 yards, and it proved to be just enough.

“Honestly on that last drive, the instincts just kicked in,” Parten said. “We knew we weren’t losing. We had to get the touchdown or the field goal and we did what we always do and went down the field on them.”

The Pearl defensive line feasted in the middle for most of the night, limiting Northwest Rankin’s bell-cow back Marion to 74 yards on 20 carries. To make matters worse, heavy rains made it tough to grip the football until it finally stopped with around seven minutes to go in the fourth quarter.

Parten finished the night having completed 16 of 32 pass attempts for 232 yards and accounted for all three Cougar touchdowns. He hit Jordan Cavitt for a 26-yard touchdown pass in the first quarter, Jordan Ware for a 36-yard score in the second and Caleb McCoy for a 60-yard pass-and-catch to put the Cougars ahead 20-8 with 5:15 left in the game.

But Baglione, who is generously listed on the NWR roster at 5-foot-9 and 136 pounds, was the biggest star of the night.

“It felt the same as last week,” Baglione said, referring to his game-winning kick against Petal last Friday night. “I know how to stay locked in and mentally focused. They promised me they’d get me down here like they did last week, so I knew to trust in my leg.”

As elated as the Cougars were, the loss was just as deflating for the Pirates (3-6). Foster completed 9 of 16 passes for 180 yards and three touchdowns, and the Pearl defense kept the score within striking distance until the offense woke up near the end.

“I wouldn’t be any prouder of this team had we won the game,” Pearl coach Justin Hunter said. “They left it all on the field and they have nothing to hang their head about. We just came up a little short tonight, and we’re not into moral victories or anything like that, but I was extremely pleased and proud with the way we played tonight.”

The win helped the Cougars keep paced with Oak Grove in the hunt for the Region 3 title. The No. 1 Warriors (7-0) stayed unbeaten with a 24-22 win over Brandon Friday night, which left them tied with Northwest Rankin at 5-0 in region play.

The Warriors get this same Pearl team at home next week before traveling to Northwest Rankin for a massive showdown on Nov. 7.

If Friday was any indication, that game too could come down to the wire.

“It’s a fun way to go out, don’t get me wrong” Parten said of winning on the last play of the game. “But it’s not the way we want to go out. We want to be able to do what we do, but I’m proud of my boy Christian. He’s a team player, and we’d love him even if he didn’t make the kick, but he did, so it’s on to the next one.”