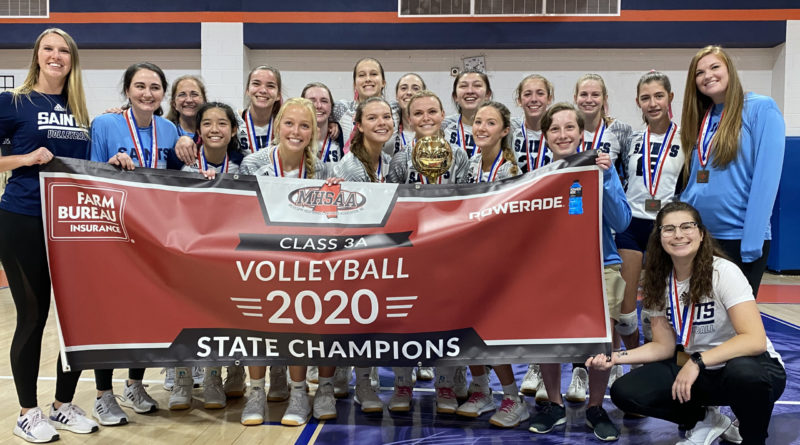 MADISON — Lauren Corby knew she inherited a great team when she took over the volleyball coaching position at St. Andrew’s prior to the 2020 season, but even she couldn’t have envisioned what the Lady Saints accomplished Saturday.

St. Andrew’s (15-6) made the short drive over to Madison Central and swept Belmont in three-straight sets to capture the 2020 MHSAA 3A State Volleyball Championship.

Winning Saturday’s match was a big step for the program, which had finished runner-up in 2015 and 2019. Corby paid homage to her predecessors for laying the groundwork, but said ultimately her team’s resolve is what led them to the title.

“These girls made it really easy on me,” Corby said. “We dealt with a lot of uncertainty with Covid, but they battled through it, even after quarantining for two weeks (during the season) out of our season. We missed out on a lot of our games, but overall, they were able to pull through.”

In the end, the St. Andrew’s front line just proved to be too strong. The combination of sophomore Maggie Sewell and senior Samantha Smith up front gave Belmont fits for the entire match, and St. Andrew’s dominated all three sets — 25-18, 25-18 and 25-14.

Junior Sarah Sullivan was an absolute beast as well, tallying at least 20 kills for the Saints.

“I think we played the best we’ve ever played and we played like a team rather than as individuals, which was a really big improvement,” Sullivan said. “Overall, we wanted this so bad, but it took everyone doing their part to get the win.”

Although Belmont (22-4) was understandably disappointed with coming up just short, the Lady Cardinals had nothing to hang their heads about Saturday.

Under fifth-year coach Stephanie Cleveland, this young Belmont team ripped through North State with wins over Choctaw County, Senatobia and Alcorn Central to get here.

“I’m very pleased (with the way we played),” fifth-year Belmont coach Stephanie Cleveland said. “I’ve had three freshman in our starting lineup all year, so I feel like I couldn’t have asked them to play any better than they did to get us here.”