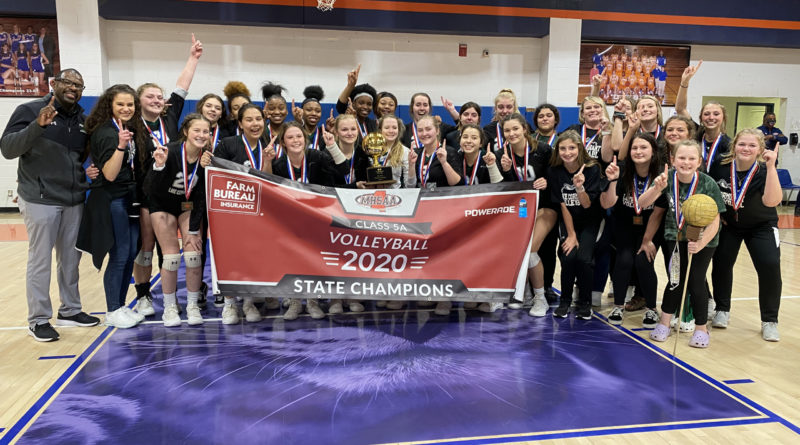 MADISON — It took two-and-a-half hours and every bit of grit they could muster, but Lake Cormorant finally put Long Beach away to win the MHSAA 5A state volleyball title Saturday night at Madison Central High School.

The Lady Gators (16-19) dropped the first set, came back strong to win the second and third, lost the fourth and hung on in the fifth to win an absolute nail-biter over the Lady Bearcats, 3-2.

“In the last few weeks, they have had so much heart and grit,” 14th-year Lake Cormorant coach Christina Morgan said. “I’m just so proud of them. They just keep fighting, and I told them if they kept fighting I truly believed they could be state champs.”

And make no mistake, “fight” is the operative word for what Saturday’s championship match with Long Beach (12-7).

The Lady Bearcats came out hot and won the first set 25-21 behind the excellent play of seniors Abbi Grissom and Chloe Drace and sophomore Samantha Wilson.

But Lady Gator senior Alaijiah Rose cranked it up a notch in the second set, and Lake Cormorant got back on track, jumping out to a 15-7 lead and holding on for a 25-21 victory. They had another big streak in the third frame — after the two teams played to a 16-16 tie, the Lady Gators scored nine of the last 11 points to take the set 25-18 and their first lead, 2-1.

A lot of that success had to do with Rose, one of the best players in the state and an Austin Peay commit.

When asked what the game plan was coming into Saturday’s title match, Long Beach coach Rebecca Tillman didn’t mince words: “Keeping No. 8 neutralized,” she said, referring to Rose. “And we did for stretches, but she was on tonight. She hit a few out (of bounds), but she really hit her spots for most of the night.”

She certainly did when it mattered late in the match. The Lady Bearcats fought back and won the final three points of the fourth set to break a 22-22 tie and even the set count at 2-2, but quickly fell behind 7-1 in the fifth and final set. Long Beach won five-straight points after being down to its final point, but it wasn’t enough.

“We’ve been working towards this for like seven years,” Rose said. “So to come up here and win this after being state runner-up two years in a row (in 2017 and 2018), it means to much.”

As sweet as it was for the Lady Gators, it was just as bitter for Long Beach, which lost in the state finals for the second year in a row.

“I’m really proud of them because they never quit fighting,” Tillman said. “We made some mistakes that helped them out at times, and that’s disappointing, but I feel like they gave it everything they had and left it all out on the court.”