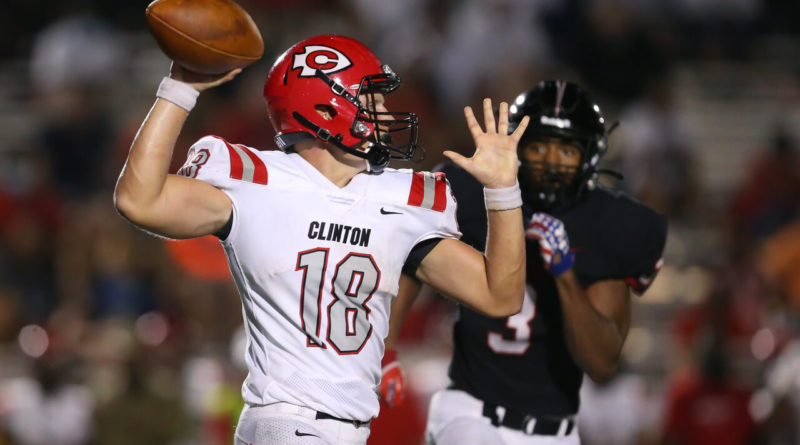 Quarterback Caleb Miller and the defense provided it.

Behind a big second half surge, the Arrows upset No. 2 Warren Central 31-16 in a key Region 2-6A contest at Robert Morgan Field on Friday night.

With the win — and with South Panola’s 12-10 win over Madison Central — there is now a three-way tie for first place between Warren Central, Starkville and Clinton. South Panola and Madison Central are both 4-2 in district play, with all having one or two games left.

“In the second half, we knew we had some things that just weren’t clicking, and our kids did an unbelievable job of battling and getting the win,” said Clinton head coach Judd Boswell. “First thing is we had to find our guts, and the offensive line did a good job protecting Miller, and he was spot on.”

With Warren Central up 10-0 with 2:04 left before halftime, the Arrows drove the field and got on the board with a Price Nixon 21-yard field goal as time expired to cut the Viking lead to 10-3 at the break.

It was all Clinton from that point on.

After Warren Central muffed a punt on the opening drive of the third quarter, Miller scored on a 4-yard run to tie the game at 10 with 8:39 left.

After forcing a punt Clinton scored in just five plays when Miller hit Jordan Battee, who fumbled at the 1-yard line but Clinton’s Michael Hughes pounced on the ball in the end zone to give the Arrows a 17-10 lead with 4:09 left in the third quarter.

On Warren Central’s first play of the fourth quarter, Clinton defensive back Rodriquez Hutton intercepted a pass and returned it to Viking 4-yard line. Two plays later, Miller scored on a 3-yard run to extend the Arrow lead to 24-10 with 11:02 left.

“Defense was huge for us tonight,” Miller said. “Warren Central is a great team and it’s a big rivalry game for us and we needed to match their intensity. Early on, we kept doing a lot of check-downs and not sustaining long drives. On the last drive of the first half and all the second half, we did that.”

Montavious Warren added a 9-yard touchdown run with 5:16 left in the game to put the Arrows up 31-10.

“Defensively tonight, we were solid and were lights out in the second half,” Boswell said. “Those cats are talented and I’m super proud of them. District is anybody’s now. We are all the same and the team that doesn’t make mistakes on that Friday night will end up winning and that’s how close it is. Our kids didn’t make mistakes tonight.”

“The muffed punt was a really big momentum swing for the rest of the half, and they did a really good job of keeping the momentum,” said Warren Central coach Josh Morgan. “We did some uncharacteristic things with turnovers. Good football is how we’ve been winning and tonight, we didn’t play good football.”