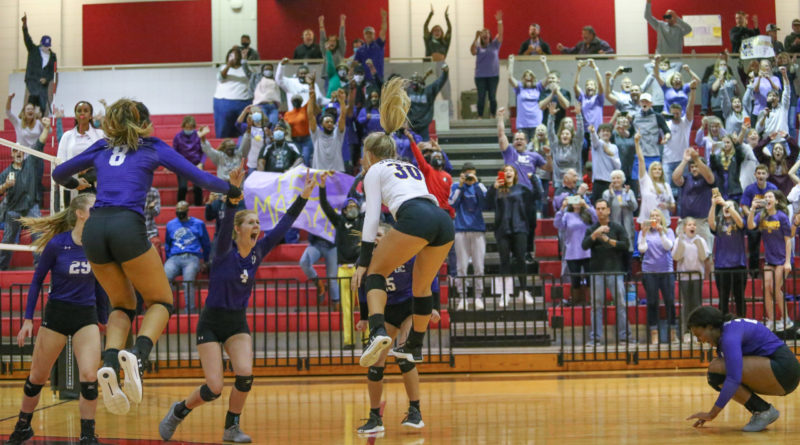 CLINTON — The third time was the charm.

Behind the play of Amonie Silas and Megan Harris, DeSoto Central was able to get past Brandon 3-1 to claim the MHSAA Class 6A Volleyball State Championship on Saturday night.

It is the Lady Jaguars (30-5) fourth state title in school history and first since 2015.

Early on, it looked like it was going to be another big night for the Lady Bulldogs. Brandon came out and took the first set over the Lady Jaguars 25-22.

After that it was all DeSoto Central.

The fourth set was back and forth, with the two teams trading leads, but the Lady Jaguars took a 19-15 lead, and Amonie Silas ended set with a kill to give DeSoto Central the 25-16 win in the set and clinch the state title.

“I told the girls after the first set to go play their game,” Falatko said. “The back row was doing their job and getting the balls up, we just made too many errors. Once they found out we were going to Amonie a lot, we had to have others step up and they did. Several girls got kills in key moments when we needed them.”

“It took us a set to get the nerves out, and once we settled in we were rolling,” Silas said. “We were just trying to pick their defense apart and made adjustments on the fly. So glad to win state my senior year.”

Megan Harris, a SE Missouri State commit, had 28 digs and two aces for DeSoto Central, while Gracie Tacker had nine kills and 42 assists for the Lady Jaguars.

“After the first set, we had to play our game,” Harris said. “We were hitting the balls where we didn’t practice, so we started doing things we normally do and ended up turning out better. We started hitting high balls to the corners, because they weren’t moving to the corners well, and we used the block to our advantage.”

“DeSoto Central is very good, well-rounded team and I knew coming in here they remember losing to us, so it was personal for them and they played well,” said Brandon coach Kelsa Walker. “(I’m) Super proud of my girls. We are very young and the experience they got tonight was valuable.”