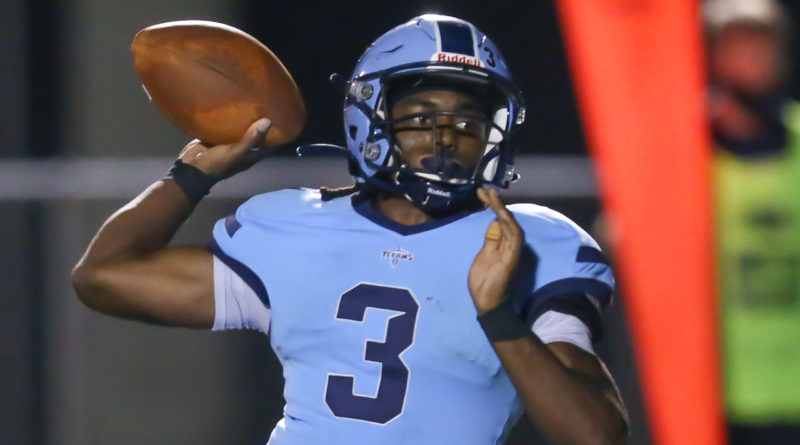 Ridgeland led most of the game, but the Rockets took the lead with 2:30 left in the fourth quarter when quarterback Eli Anderson caught everyone off guard with a 54-yard TD pass play to Dagan Martin. Jarquez Hunter ran in the two point conversion and the Rockets had their first lead of the game, 29-26.

Ridgeland took the ensuing kickoff on its 43-yard line. McDonald had a 13-yard run and completed two passes to put his team in scoring position. Then he connected with Williams for the victory.

The Titans improve to 7-1 and 4-0 in the Region 2-5A standings. They close out the season with Holmes Central next Friday night. It was Neshoba Central’s first loss of the season as they fell to 7-1. The Rockets close the regular season at Cleveland Central Friday night.

The Titans took the opening kickoff and drove 77 yards in eight plays for a touchdown. McDonald connected with Richard Mays on a 26-yard TD pass play. McDonald ran in the two point conversion and the Titans led 8-0 with 9:57 left in the first quarter.

Neshoba Central took the ensuing kickoff on its 29-yard line and drove the ball 71 yards on nine plays for a touchdown. Hunter scored his first of three touchdowns on a two-yard run. The try for two failed and the Titans led 8-6 with 6:03 left in the first quarter.

McDonald would find Mays two more times on touchdown passes in the first half.

The second McDonald-to-Mays TD came later in the first quarter on a 33-yard pass play. The try for two failed and the Titans led 14-6.

The third touchdown came with 35 seconds left in the first half, capping a nine play, 45-yard drive. The try for two failed and the Titans led 20-6 at the half.

Neshoba Central took the second half kickoff and drove 61 yards in nine plays for a touchdown. Hunter burst up the middle for a 28-yard TD run. Hunter scored the two-point conversion and the Titans led 20-14.

Ridgeland answered when McDonald ran 33 yards for a touchdown. The try for two failed and the Titans led 26-14.

Down, but not out, Neshoba Central took over on its seven-yard line. On first down, Hunter bolted for 93 yards to give his team a touchdown. Hunter Bavetta kicked the extra point and Ridgeland led 26-21.

Late in the game, Hunter was pounding the ball down the field when Anderson hit Martin to give the Rockets the lead. But McDonald came back with 54 seconds give the Titans the lead and the victory.

Neshoba Central coach Patrick Schoolar always tells his team to ignore the scoreboard and to keep playing until the game is over. And that’s just how the Rockets responded. They drove to the Ridgeland 35-yard line before running out of downs with eight seconds left.