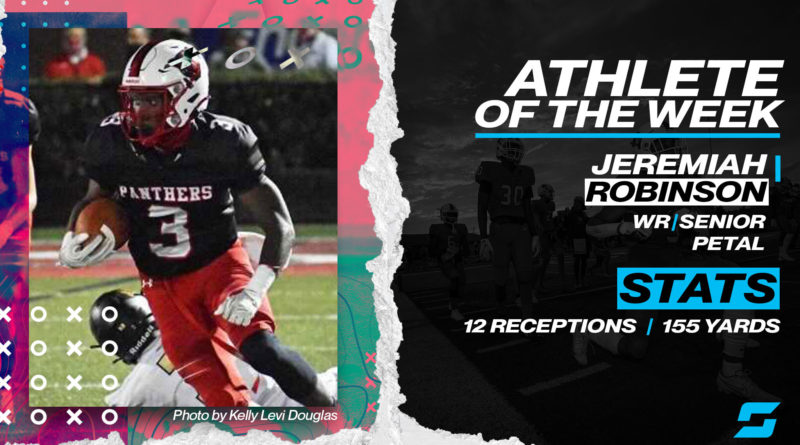 We are currently accepting Athlete of the Week nominations for the week of Oct. 19-25. If you would like to nominate an athlete, please email regan@scorebooklive.com or tag us on Twitter or Instagram at @sblivems.

Here are the other athletes who were nominated for Oct. 12-18:

Vic Sutton, Madison Central QB: Vic Sutton accounted for both touchdowns in Madison Central’s stunning 15-9 upset of No. 1 Starkville. Sutton threw a 25-yard TD pass to Creek Robertson in the first half, then scored the game-winning TD on a 10-yard run with 4:49 left.  –GAME STORY

Dorian Robinson, Picayune RB: Dorian Robinson had three rushing touchdowns — all in the first half — as the Maroon Tide rolled to a 42-13 Homecoming victory over Long Beach.

Telvin Amos, Lake Cormorant QB: Telvin Amos ran for two touchdowns and threw for another as the Gators blanked Columbus 28-0.

Dayan Bilbo, Vancleave RB: Bilbo rushed for two touchdowns and caught a TD pass to lead Vancleave to a 40-28 win over Pass Christian.

Cam Marion, Northwest Rankin RB: Junior tailback Cam Marion rushed for 159 yards on 24 carries, including a key 12-yard run on third-and-7 from the Petal 27-yard-line that set up Northwest Rankin’s game-winning field goal in their 31-30 win over Petal.

Khi Holiday, Tupelo Christian Prep QB: Holiday rushed 12 times for 157 yards and five touchdowns, passed for 313 yards and three TDs and returned a kick 77 yards to lead TCPS to a 63-14 win over Vardaman.

Creek Robertson, Madison Central WR/SS: Robertson caught a 25-yard touchdown pass and had 10 tackles and a pass breakup on defense in Madison Central’s 15-9 upset of No. 1 Starkville.

Chris Davis, Wesson WR/FS: Davison had 3 TDs and 154 yards on 8 catches. Additionally he had 2 INT, one being a pick 6 in Wesson’s game against Amite County.